Over the weekend, we decided to take Anthony to see Santa Claus at the local mall. Not just so he could give the jolly old fat man his this year’s list of demands, but to also get his picture taken with him.

Everything went smooth and Santa was an alright guy. Anthony requested some big trucks. (I better go through his list again–I don’t remember buyi…I mean, seeing those on it.)

At any rate, the seasonal photographer took a few shots that looked good (on the monitor, at least). But it was when I got the print handed to me that I had to speak up.

This print–they wanted $14.95 for a single 5×7–was about as crappy as I’ve ever seen. Seriously, I’ve seen clearer prints produced from 110 negatives. Not only was it blurry, the faces were washed out. About the only recognizable feature on either face was a pair of eyeballs. The rest of the face was a white blob.

Now I hate to tell anybody how to do their job, especially some kid just trying to make some extra holiday money, but this was just horrible. And being that I’ve worked in photo labs and know a bit about photography, I asked the lady at the counter if there was anything that could be done with it.

“Um…I don’t know,” she said. She then told the photographer to change the setting on the flash unit since they weren’t “coming out right.” I then told her I wasn’t going to pay for it since it was so lousy. Ann intervened since our chances of getting Anthony in a mood good enough to take his picture with Santa are pretty rare.

“Can’t you do something with it (in Photoshop),” Ann said. I replied that I can only work with what I’m given, and this was total crap. It was so bad that the people in line behind me became concerned and, if I heard them properly, also refused their print.

To make matters worse, the man in front of me with his new baby bought the largest package with keychains and a frame. I can only hope his was better because man, I’d sure hate to think his child’s first picture with Santa looked as bad as the one I turned down.

Neither the photographer or cashier seemed concerned about shooting the photo again so we simply left. What would we do now? The answer was simple: Disneyland, of course.

I made a call to my brother–he was working that day–to find out where Santa might be. He directed me to California Adventure. And lo and behold, there he was: 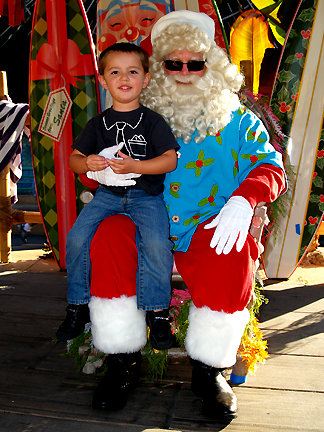 See, this is what a Santa picture should look like. And although Disneyland and California Adventure have photographers strategically placed around the park, I chose to take my own photo (seen above). I also let them take a few shots which were then uploaded for viewing or ordering.

Ironically, the photographers are also willing to take your photo using your own camera: 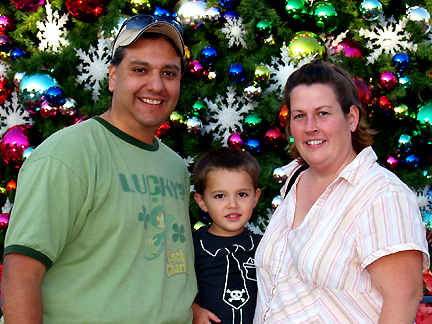 So in the end it all worked out. Both parks are beautifully decorated for the holidays, and even the entrance to California Adventure has been decked out: 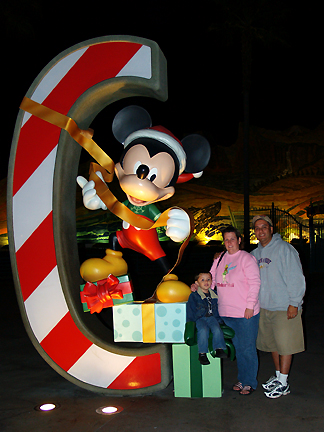 And don’t get me started on the Haunted Mansion. As usual, it’s amazing for the holidays.