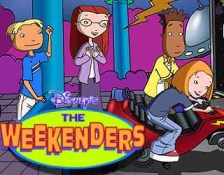 Well, holy crap! It’s another weekend and it’s now August. Where in the hell did the month of July go?

I have no idea so I guess it was pretty well spent around these parts.

Anyway, here’s the weekend slate. Note that I don’t give specific days because I have no idea when any of this will be happening. That’s how I roll sometimes.

But if anything takes priority, it’s going to be getting a haircut–seriously. When it starts to get thick and I need more than three goops of hair gel to tame it, then it’s definitely time. And it’s at that point right now.

Another trip to the Orange County Fair may also be in order since it’s over on Sunday! Noooo! We’ve only been once this year and it was a lot of fun, but I guess I’m kind of over it. If anything, Ann and I had planned on going sans kid since we tend to spend a lot more money with him in tow. Imagine that…!

Oh, and remember post sometime last week when I said that we had canceled our Las Vegas trip? Well, it’s officially on again. We broke down things even further and realized that we could save up enough money if we started now, and that’s what we’ve done. And c’mon, if you had the chance to stay in a joint like this for free, would you pass it up?

Didn’t think so. She’s also planning on buying show tickets well in advance: Titanic, Bodies, and a real showgirls show which she’s been dying to see since forever (and being a guy, I wouldn’t mind seeing myself).

All of which leads to this. Since we plan on spending almost a week there, we’re practically going to live on foods that are less than healthy. Therefore, I’m going to step up the weight loss program a bit and make the following proclamation: I am going to lose my remaining 12.7 lbs. and be at 200 lbs. before we go on our Vegas trip in October.

That’s months ahead of schedule but I’m going to do it–just you watch me. The last thing I want to do is be somewhere near my goal then take this trip, gain weight, and have to lose it all over again. I’d rather get to my goal first and then shed the pounds when I get back. It’ll work.

That’s all. Have a great weekend! 🙂