The family — I refuse to use the currently popular and obnoxious term “fam” — was out decorating for Christmas Saturday night, mostly concentrating on the positioning of our new laser light display.

We’ve been looking at them for some time now and found them on sale at OSH so we caved. And for $20 I have to admit they are pretty spectacular. 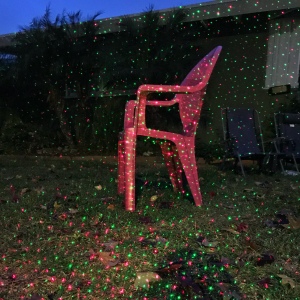 The colors, man! The colors! Plus we’re feeling exceptionally lazy this year so we’re only putting this up with a few strings of lights. Humbug!

While all of this was going on, our beloved neighbor* was in his frontyard listening to some music through his Bluetooth speaker. I didn’t really notice it until Ann said something.

Ann: The jackass** is listening to that Sam Smith chick-flick crap that you’d hear in those romcoms.

A beat. I heard what she said loud and clear, but I wasn’t sure exactly what she meant by the last word.

Ann: He’s listening to crap you’d hear in a romcom.

There it was again.

At this point, if this were a phone conversation using a wired GTE Phone Mart landline, I would have tapped it several times on the nearest hard object to make sure I was hearing things correctly then continued.

Me: Is that what it means?

Ann: Yeah, I heard it on the radio the morning.

Keep in mind I don’t listen to morning radio — I’m a Spotify guy and hate blithering morning jocks trying to elicit a laugh at any cost. I’m not entirely surprised they’d use such a stupid term.

Me: Oh okay. Well, don’t ever say that around me again. 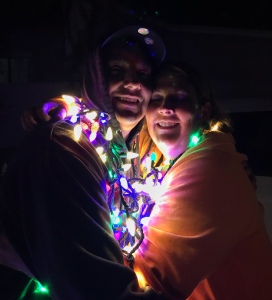 Here we are taking a break from the decorating in Season 24 of our own little romc…uh, romantic comedy. Hats off to the kid, now taller than Ann and almost eye level with me, for taking this picture.

You all decorated yet?

Composed on an iPhone 7 Plus app using the WordPress app because I’m feeling exceptionally lazy tonight.