Since this is a personal blog, I figured that instead of writing a year-end review about other things, it would be better suited for me to give a year-end review of things that actually happened in my life. It’s much easier to do something like this now since chances are I captured those moments with my phone, giving me photographic proof of the events.

With all of that out of the way, here’s a month-by-month photo essay of how things went with me and the family in 2013, some of which was never mentioned here on the blog. Take a virtual trip of the things we did, places we saw, events that brought us happiness, triumph, and even sadness.

Got your scrollin’ finger ready? Good! Here we go!

END_OF_DOCUMENT_TOKEN_TO_BE_REPLACED

Believe it or not, there was once a time when memories had to remain just that. If you saw something that was beyond words and had no way to document it then a memory was all you got.

If you were really lucky (or strange for that matter), you might have had a camera handy to capture the moment and share with a few friends and family.

That’s exactly what happened to me and Ann back in the late ‘90s. We were out and about one day when I saw something out of the corner of my eye. I had to double-check to make sure and when I did, I was pretty excited: it was the Oscar Meyer Wienermobile.

Now remember the time. Then consider the fact that I didn’t even have a mobile phone yet and even if I did, it would have been a Motorola Tracfone capable of only making calls since cameras on phones would be years away.

So what did I do? I found the nearest grocery store, ran inside and bought a disposable camera – link added for the curious – so that I could take some pictures for posterity. We went back to the Wienermobile and took some shots of it and we still have them somewhere, but exactly where is beyond me.

Fast-forward to 2012 when we saw the Wienermobile down the street from us. Instead of wishing we had a camera or scrambling to find a store where we could buy a disposable camera, we just whipped out our phones and took all the shots we wanted. Then, of course, we shared them with the world within seconds.

We’ve come a long way for sure and I’m truly happy about that.

This was especially true today when I saw something that I didn’t think I’d get the chance to see. I was in Mission Viejo helping my buddy with some things at his restaurant when I came across this truck parked behind the Ralphs grocery store in the same shopping center. 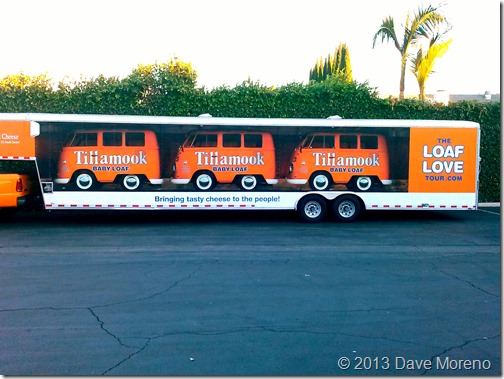 I didn’t think much of it and figured it was just there resting for some reason. When I pulled away I looked to the left and lo and behold, there it was! The Tillamook Cheese Baby Loaf VW van!

Of course by now I had to stop and take pictures of it.

First of all, VW vans are cool. I learned to drive a stick on one of these things albeit a full-size one. Second, shrinking one down to a pocket-size car that Anthony could probably drive makes it even more appealing.

Of course, I had to get my picture with it so that I could send it to Ann and Anthony.

Once I sent her this picture, Ann asked me to go and see if they had some coupons. I went in the store and talked to the reps for a little bit, and ended up with more than coupons.

I left with coupons, a silly mask, and some buttons. I also tried some of the cheese and yes, it’s delicious. We will definitely use the coupons very soon.

And in my researching of the Baby Loaf’s tour, I discovered that it had already visited my town back on October 27 so I was glad I was able to see it here by total chance. I had no idea it was going to be here today.

So there you have my fun for the day and I’m glad I was able to share it with you without much difficulty. If this were 1995, the disposable camera would probably sit around the house another week before I got the film inside of it processed.

Thank goodness for advancements in technology.