On Saturday, Anthony had another golf event at a local golf course that we hadn’t been to. It was hosted by the SCGA, the organization that hosted the 100 Hole Marathon earlier in the year.

After the event (where he was complimented on his form/stroke by a PGA pro instructor), we decided to head over to our latest, greatest, most favorite grocery store: 99 Ranch Market, a place which specializes in Asian products. One would think that with the area it’s in and their specialty/niche items that the clientele would be mostly Asian. That’s far from the truth because I saw people of all ethnicities shopping and enjoying their experience. As I posted on Facebook, this is how the world should be: one people together for a common purpose. It was honestly quite beautiful.

But before I witnessed this wonderful display, we happened upon another store on the way in and it was all over for me, at least. From a distance I really couldn’t tell what it was but when as we approached, it became more obvious.

The store was called Daiso Japan. They sell stuff from Japan. Most of it sells for $1.50 or sometimes less (and in some cases, more). I was immediately lost.

As my eyes glazed over their wares displayed in the window, I told Ann that we HAD to go in there. Right now. NOW, I tells you.

See, I have this strange affinity toward all things Japan, whether it’s J-Pop, their culture, or just cars. I wouldn’t consider it an unhealthy obsession as much as I would a curiosity; it’s simply a glimpse into a place I’ve never been would love to visit sometime.

But above all, I can’t get enough of Japanese craps, as in items one would find in a place like Daiso. And if I ever won the [insert jackpot game of your choice], I would go to a place like Daiso and buy one of everything whether I needed it or not. Then I would book the next flight to Japan and either go nuts buying more Japanese craps or end up not coming back and taking up residence in a capsule hotel where…I wouldn’t have room for all of my craps.

Okay, maybe it is a bit unhealthy. But hear me out before you judge. Take a look at some of the assorted craps I found in Daiso and why me going to Japan would be a dangerous, dangerous proposition.

First, upon entering the Daiso, I discovered that J-Pop was being piped into the place and could be heard all over the store. My shopping experience was already at a 5-star level. As I made my way through the store I started to notice why I love crazy Japanese craps.

Here we have a pair of training chopsticks with some kind of animal face on the top. Hey, whatever gets a kid to learn how to use them is fine with me. But look at the packaging! Aside from “Training Chopsticks” there’s no other English on it and that’s what I find so intriguing. Sure, I would know what they were if not for the English but still, the packaging on all Japanese items is insanely pristine and damn near perfection. 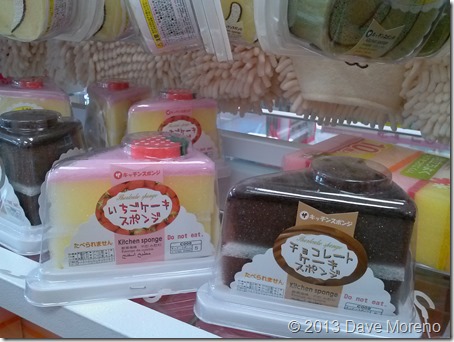 And what do we have here? Oh, nothing but some kitchen sponges SHAPED LIKE CAKE SLICES! Note the precautionary “Do not eat” on the bottom right of each sponge-cake.

Enjoy the softness! Aside from the “WTF?” factor, here’s another reason I love Japanese products: Engrish, which is Japanese translated into English that produces humorous results. What you see above isn’t the best example of it but still, it’s pretty funny to read on the pack of…grape candy. 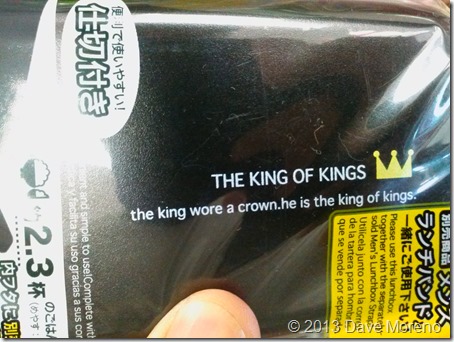 Now this here is some great Engrish. Historically, kings have worn crowns and as such, were…well, kings. Maybe he was Super King. 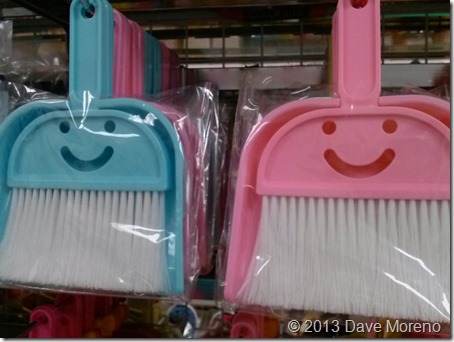 These happy little guys will make sure your mundane task of sweeping up that pile of spilled Yan Yans will be a joyous event!

I almost slapped this on my face and started singing Music of the Night.

The “frip-top” made me laugh so hard that I had to buy this. It is now my daily container for the snacks I take along with me to work. 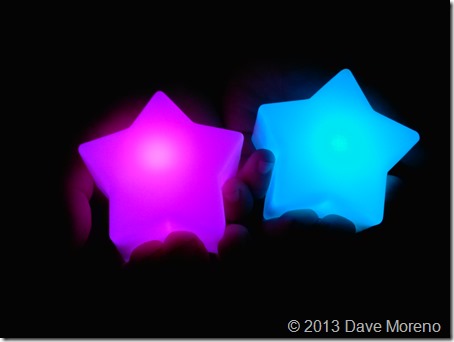 Aside from the chuckles I was getting, I did buy stuff that wasn’t amusing and too cool to not pass up. I ended up grabbing two of these really bitchin’ battery-powered, color-changing LED stars which we used as décor that night for the Supermoon viewing from our front yard. I love goofing around with artificial lighting and taking pictures with my phone. The results are always interesting.

But I’ve saved the best for last. While walking down the aisle that had party goods, Ann pointed this out and almost fell on the ground laughing. 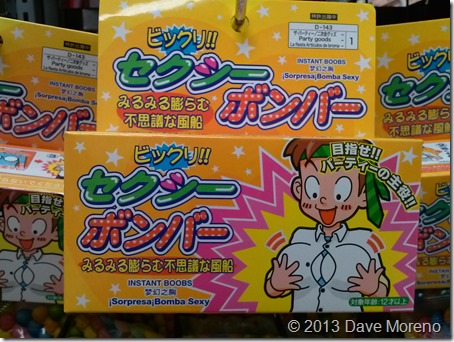 This place has everything, even inflatable boobs that, according the package, are “Sopresa Bomba Sexy”! Well, maybe not on a guy with a necktie around his head or any guy in general but you get the idea. I think.

But sadly, as strange as this item was, it has NOTHING on the next one which is still leaving me, for the lack of a better term, curious.

You know, there are some terms I never thought I’d search for in my life. But after seeing this item, I had to go to Google and search for “inflatable swan penis” to find out exactly how this thing worked and what it did because the instructions on the top of the box didn’t really help me.

So after researching it, here’s what you do.

If you follow the instructions on the box cover, you can also opt for putting on a tutu and sticking the swan-penis to the outside. This would obviously be my choice. Go big or go home, yo.

(Note that the bewbs also inflate using the same kind of chemical reaction.)

Man, I don’t know what kind of partying they do over in Japan but I’d wager that they are pretty crazy, which kind of scares me and excites me at the same time.

In the end, here’s what we hauled home. 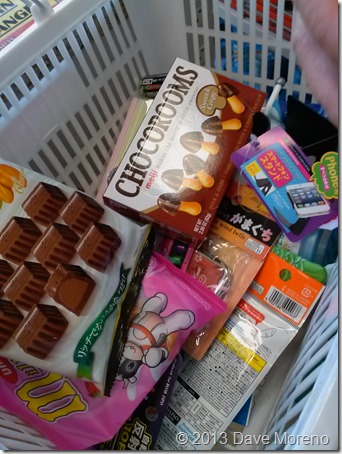 And this, my friends, is why I should never visit Japan. But do you know what the sad thing about all of this?

We’re going back on Friday for more.

My name is Dave, and I have a problem with Japanese craps.

And music. Now everybody do the Monkey Dance! Berryz Koubou, take it away!