Yep, so I’m a day late with this one. With the release of the SNES Classic yesterday, I spent the evening playing Super Mario World with Anthony on my original console. 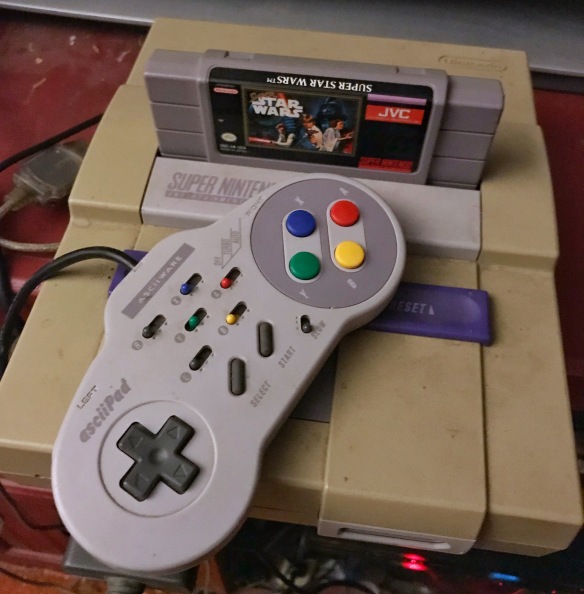 Seen here with Super Star Wars, it’s ugly, turning yellow and still works, but I’m not sure for how much longer. It couldn’t seem to handle some of the more intense movements in certain games — because, you know, 16 bits — so who knows. Anyway, that’s the reason for not posting this last night.

Let’s go with the Friday Five!

1. From whom did you receive your first real paycheck?

My first job ever was at a one-hour photo lab inside a grocery store (The Giant branch of Ralphs that took over former Zodys locations). It was called PDQ 1 Hour Photo and I still have my name tag somewhere. I made a whopping $4.25 an hour which I think was minimum wage at the time. The Giant was a warehouse-style grocery store ala Costco that featured smaller shops on the inside. It was an interesting concept but it didn’t last.

By the way, saying someone got their clothes at Zodys was an insult back in the day.

2. Among board games involving the exchange of money, which have you enjoyed most?

Easy: none. I hated and still hate Monopoly and never really dealt with board games that involved money. I spent way too much time playing games like Perfection which probably explains why I’m this way.

3. PayDay is the name of a candy bar consisting of salted peanuts rolled in caramel surrounding a firm, nougat-like center. How does it sound to you if you haven’t tried it, and how do you like it if you have? Is there a similar candy bar you like better?

I like PayDay bars but they are hardly satisfying if I want a snack. Lots of protein, yes, but I normally have a box of protein bars in my drawer at work. I get my protein and my chocolate craving in one sitting. I’ll still buy a PayDay now and then but they aren’t at the top of my list.

4. When did you last do something nice for yourself just because it was pay day?

Why, this payday I did! I bought an Xbox One game called Cuphead, a hand-animated scrolling shooter adventure made to look like a 30s-era cartoon. I have been waiting for this one and downloaded it today after Xbox got their server issues in line (*shakes fist*). The music, dialog, animation, everything is to-the-era perfection. It’s like you’re playing a color version of Steamboat Willie but a lot less Disney-fied (read: animated violence).

5. What person with the surname Day are you most familiar with?

Although Morris Day is the first, I’m going to post Doris Day video. Just because.

The kid is venturing out with friends tonight to go to Knott’s Scary Farm/Halloween Haunt, a local event at Knott’s Berry Farm that’s been going on for over 40 years. It’s a big local event that is packed every night and something I myself would never attend. I was scheduled for a few Haunt shifts when I worked at Knott’s. Way too many people for my liking. Nope.

But the good thing is I got fantastic corporate pricing and it gives me and Ann the chance to have a dinner sans kid. It will be nice I’m sure.

#BackyardBuddha sits in quiet solitude because he knows nothing is under control.
Yesterday I had my first eye exam in a few years. Tests show they are both healthy with no ailments or concerns but as these cool shades indicated, my vision has gotten worse and I’ll need to wear #glasses daily — I have zero issues with this because I could see so much better with these lenses and refuse to stick my finger in my eye for contacts (just not my thing, people). Unfortunately, this meant using my credit card which I’ve been keeping clean but for something I’ll need all the time, it was necessary. Big thanks to Dr. Yamanaka who was funny, thorough and the best optometrist I’ve had, and who let me take this picture looking like a @petshopboys album cover — the only reason I posted this 😁
Finally got to see this @muckrock piece last weekend. Worth the wait 👍🏼 And ❤️ if you agree.
Remember those baby hummingbirds? They were both hanging out in the backyard recently being fed by their mom. Unfortunately I didn’t get a shot of her feeding them but here’s what I could manage.
This shot is for all the locals who think that closing my former Ralphs was solely based on the city’s decision to pass “hero pay” for grocery workers. Having worked at this store and knowing its history of being on the real estate market, plus seeing what customers never do, it wasn’t a surprise. It just made Kroger’s decision easier. For example, there’s this refrigeration unit near the door. Look at it — this isn’t in a dumpster, it’s in the store and up until a few days ago, this rusted and decrepit unit was used to stock grab-and-go beverages. This is just ONE unit in a building that’s over 50 years old. Do the math and tell me how you think the rest of them have held up over the years and whether this store could even last without needing a major overhaul. Quite simply, it couldn’t. So if you’re still complaining about it closing then you just don’t know.
“Thank you for shopping at Ralphs.”