Tonight we had another cool celestial event in which Jupiter appeared to be pretty close to the moon. I had two telescopes and three cameras outside with me and despite it appearing close to the naked eye, it was difficult to get them in the same frame with a telescope.

And I experimented with the cameras and several settings on each in order to capture the moment. Well, I gave it the old college try and this was the best I could come up with after all of the shots I took (click for slightly larger version). I did just a little enhancing with Photoshop to darken the moon as it was a bit bright in the original shot. 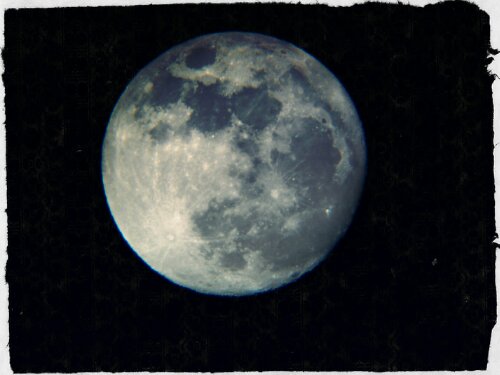 As seen through Anthony’s new telescope. Taken with my LG Optimus Elite and edited with Pixlr Express.

There have been quite a few interesting events happening in the skies this year.

First, we had the Super Moon – and we and the neighbors had a little viewing party (all images enlarge when clicked): 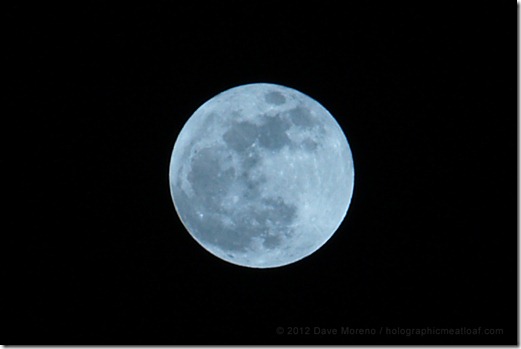 A few weeks later we had a solar eclipse which we weren’t able to see with a pinhole viewing device since Anthony and I were at Dodger Stadium watching our team beat up the Cardinals. But fortunately, we were kept abreast of the event as it was being shown on what was once called the Mitsubishi Diamondvision screen: 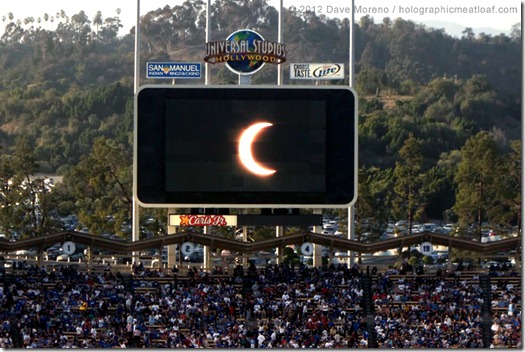 It was really strange seeing the light it produced, as is evident by this shot of the outfield bleachers. Keep in mind that this was at 6:37pm according to the clock on the scoreboard. Note the bluish hue rather than the standard yellow:

Here’s another shot I took in panorama mode:

Then today, we had the Venus Transit in which Venus crossed in front of the sun. It took the planet 6 hours to complete its journey, something that won’t happen again until 2117.

Needless to say, we’ll all be gone by then and none of this will matter. But in the meantime, enjoy one of the many shots I took with no less than four filters – red, green, blue, polarizer – taped to the end of my zoom lens: 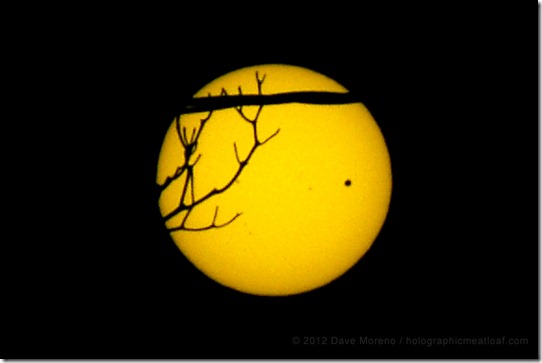 The big black spot is Venus and the smaller, faded ones are sunspots. I just used the branches and power line to frame the shot a little bit. Here’s one from earlier in the day without all the artsy stuff to distract you: 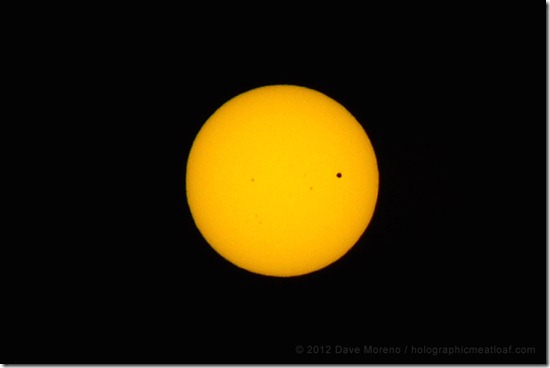 Just think about it: everyone who saw this today will be gone the next time around. Pretty humbling, isn’t it?

The universe is an amazing and wondrous place. We should all take more time to explore it and see all it has and continues to offer.