I got this Captcha-style image the other day and thought my answer was the only logical choice. 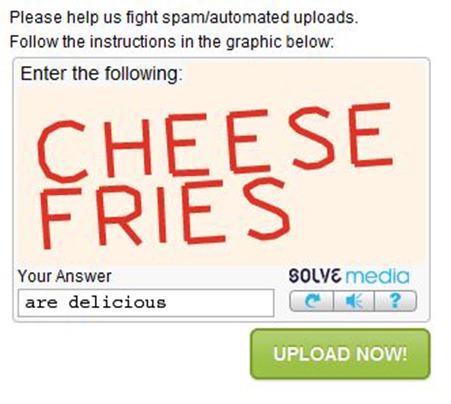 It’s been about a month since my last post so I thought I’d make an appearance to let everyone know I’m still interested in doing this. The time away was much needed.

Now let’s get to the heart of things and why I chose today to write, and it’s something I guarantee you didn’t know about me.

Do you know what I have in common (at least according to Wikipedia) with Phil Collins, Vincent van Gogh and Adolph Hitler? I know, it’s an odd combination but I sort of wanted it that way.

Tinnitus, which I believe to be  Latin for “pain in my ass,” is a condition in which a person hears constant (read: it CANNOT be turned off) ringing in their ears. While generally described as “ringing” the sound is more of a never-ending tone that is nowhere near the sound of a ringing bell.

So how would I describe it? Not easy. It’s kind of like asking a color-blind person to describe the color they cannot detect.

But to put it succinctly, it’s extremely annoying and at times downright painful.

And that’s why I’m writing: to get my mind off of it for a bit. While the ringing in my ears is constant and oftentimes very loud, I’ve learned to tolerate it and keep it in check so that it doesn’t drive me nuts. And it will if you let it: while trying to sleep or just enjoying some quite time to yourself, that ringing is relentless and aggravating.

Yesterday things started to get worse. I had a rumbling inside my right ear which only got louder as the day went on and by today, it was ridiculous. But this noise is one that I think most can associate with: it felt and sounded like when you get water in your ear with the notable exception being that, if the condition is flat-out at its worse/intolerable, certain noises at certain pitches will bring you to your knees.

Take this example. Years ago, Ann’s grandfather (may he rest in peace) took us out for her birthday. In what I still consider the worst case of ear rumbling I can ever recall, I had to excuse myself from the celebration because the sound of the utensils hitting the plates was bringing tears to my eyes. My ear ringing and rumbling, accompanied by a headache, was just too much to handle. Yes, it hurt that bad and I spent the entire time in the car.

Fortunately, today’s case isn’t that bad but I am still suffering a little: equilibrium slightly off, loud noises bringing a little pain, moderately watery eyes. It’s no fun but I’m getting by.

Now it’s time for some Q&A.

How long have you had tinnitus?
For as long as I can remember or at least from age 10. It’s much easier to ignore when you’re a kid because, well, you’re a kid. Time moves fast and you haven’t a concern for much else besides Hot Wheels and coloring books*.

How did you get tinnitus?
I don’t know. Licking too many frogs**? Maybe I’m just lucky. I hadn’t attended any concerts at the time I first noticed it so I can’t blame it on that. But I’m quite sure attending many shows in my teens, accompanied by constantly being plugged into my Sony Walkman cassette player with Dolby Noise Reduction didn’t help. But I can still hear fine.

What do you when to combat it when it acts up?
Well, not a lot. For the most part I just let it run its course and in a few days I’m all better. But one of the things I’ve noticed is that when it does act up (the pain and rumbling at least), is that I speak at a lower volume. I do this for two reasons: 1) it’s hard to tell how loud I’m speaking with one ear not functioning right, and 2) the vibration inside the cranial cavity will aggravate my ear and cause the pain/ringing to act up again. The best thing I can do is avoid loud noises and try to block it out by listening to white noise apps on my iPod. The noise works to a point but despite it all, if I concentrate hard enough, I can still hear the constant ringing.

No, having tinnitus is definitely not a lot of fun. But you know what is?

Sitting on a brass turtle outside a Chipotle restaurant.