I’d like to change gears with today’s post since the last one wasn’t exactly all daisies and rainbows. But if I can throw this in, we all miss Cindy terribly and are still reeling from her passing. More later, but let’s get to this post.

Since I met my weight loss goal well over a year ago, cycling has become a regular part of my exercise routine. And as you probably know, I used to ride my bike to work about a year ago, only to be harassed day after day after day about it. And while I truly do enjoy the ride my Trek 7100 delivers, I had been in the market for something different for some time now.

Like a Trek mountain bike that I could thrash the shit out of since, well, my 7100 couldn’t possibly handle that kind of abuse.

So I began looking online and at my local bike shop for something that would suit my needs. And yeah, I found what I wanted alright and yeah, it was not quite within my budget. Bummer.

Then one day while I was…somewhere I can’t remember right now, Ann sends me a text. Turns out that she was at the local thrift shop and, knowing I was in the market for another bike, told me she had found one. The conversation went a little something like this:

Me: really? send me a pic 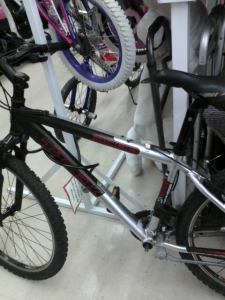 Me: not bad but its missing the crank! no thanks!

Ann: ok just checking. i didnt even notice that

Yes, this was exactly what I had been looking for only it was sort of broken and missing parts. There’d be no way in Hell I’d be willing to pay $100 for that dilapidated thing. Nuh-uh. No way.

I mulled over it for a few days…okay, hours and couldn’t really decide if this was a good deal or not. But it was exactly I wanted, and wasn’t the $400+ that a new one would cost. And I still couldn’t decide.

The next day I found myself driving out to the thrift shop, getting there well before opening and hoping that the bike would still be there. At 10 am, I happily strode into the place and yes, it was still locked to the display–the only one that was. After all, this was a Trek and not a Murray.

But before I walked it up to the registers to pay for it, I asked one of the employees if I could get it for a slightly discounted price. Come on now, how could I pedal the damn thing without a left crank?

I talked them down to a 20% discount and walked out of the store paying $87 for the thing. Happiness Level: 50%. Now all it needed was repairs.

A few days later, I took it down to the bike shop for a quick inspection and while there are a few other issues that could be solved later, the main thing was getting that crank repaired. Oh, and removing that pesky broken bolt in the bottom bracket, too.

I took it home and, in the best possible way, inspected it–like I had any kind of clue as to what I was doing. I tried my darndest to remove the bolt from the bracket but just couldn’t. If I could have safely removed it, there’d be a chance that I could get away with only having to replace the crank. No dice.

It was back to the bike shop a week later, where I left it and got an estimate for the repairs: $95. That would bring the overall cost of the bike to $182. Hell, you can’t even buy a cheap mountain bike at Target for that little, and this is a freaking Trek! I was told to come back the following Thursday and pick it up but now that I knew exactly how much I’d be spending, I couldn’t wait to ride the thing. I just needed some cash to pay for it all.

When I finally did have the money on Friday, I went back to the shop, bought a bottle cage for it and brought it home. I took it for a spin around the block and man, I would have been a fool to leave this bike at the thrift shop because it rides amazingly smooth for being used and abused (as the broken crank would seem to indicate). Sure, there are some areas that still need some fine-tuning but in the end, I got exactly what I was looking for–and for less than I expected.

So behold, the bike which I have breathed new life into:

Happiness Level: 100%. I see us riding many miles and trails together, and I’m looking forward to it.

Oh, and I don’t know why I was worried about how Anthony would handle the Cindy situation. Here he is playing at Walgreens the day after (as documented with my iPod nano):

Ahem. The boy will be fine.

#SeenOnMyWalk: #RKelly in the #gutter instead of being trapped in the closet. (Does anyone remember that? No? Didn’t think so.)
I haven’t seen anything worth posting lately so here’s my latest drawing and its accompanying #sticker done in @procreate and printed by @stickermule. #JungleAirlines is the airline that was shown a few times in the show #AppleAndOnion but more prominently in the episode “Sneakerheads,” where the duo takes the airline to the jungle to retrieve their passports in order to make their last will and testament so that Mayor Naise can’t inherit them when they die. If none of this makes any sense, then you should probably be watching this show 😁
6:18 am: File under hashtag #seenonmywalk. Imagine explaining to someone much younger than you that at one point in time, a newspaper comic strip character (“A WHAT character from a WHAT paper?”) was so popular that people were sticking stuffed versions of him to the insides of their cars — and having them stolen. (Article: https://www.mentalfloss.com/article/87936/great-garfield-car-window-toy-craze)
Here’s something a bit different, something I saw while on my walk last week but forgot to post. The first shot was what I ended up taking away from this object; the second one shows the whole thing in its unedited glory. It goes to show you that with the right vision and a little creativity, even the most mundane, ordinary things can be transformed into something entirely different.
Back to more recent shots: saw this while stopped at a red light today. Pretty sure Fred’s violating some kind of OSHA rule by not wearing proper footwear, but at least he has a hard hat.
Forgotten shot from a few weeks ago. It’s an old dresser drawer that became part of a #BMX track along the side of the #SanGabrielRiver trail.