Well, this last week sure was a busy one.

As I had mentioned in this post, I rode my bike in the Long Beach Marathon Bike Tour for the second year in a row. That means that it was another day of waking up at the crack of dawn (or 4am to be precise), preparing my stuff, eating breakfast and then making my way downtown to find my assigned parking lot, ride my bike to the starting line, then wait for the 6:30 start time. A lot of preparation but a lot of fun.

In the end, I trimmed my time down to 1:42:43 which is about 5 minutes less than my time last year. It was a beautiful day and it’s always humbling to be riding the bike trail along the beach to see the sun rise with the sound of the waves crashing in the background. I love this event and look forward to it in 2012.

Do I look exhausted?

Nah, I was fine. I could have gone a bit longer but hey, 26.2 miles was cool. And in case you didn’t track me, here’s how it looked: 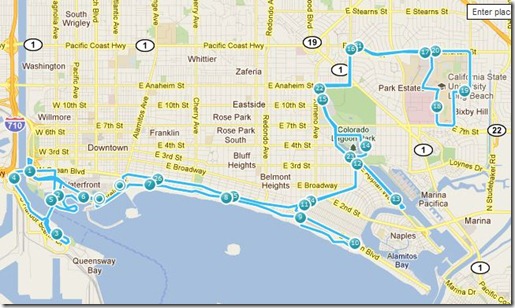 Believe me, it’s not all that bad.

With that done, it was time for the rest of the week in which I worked overtime on Wednesday, Thursday and Friday, the latter two days going in at 6:30 am. And oh, did I mention that I also worked my night job on Thursday and Friday from 5:15 to 8:30 or so? Told you I was busy.

But wait, there’s more! On Saturday, I participated in my first 5k mud run down at the Del Mar Fairground/Racetrack which is just within the San Diego city limits. While not as early as the morning of the bike tour, I woke up and pretty much did the same thing in terms of preparation, breakfast, etc. Then, of course, hit the highway for the 90-minute drive to beautiful San Diego.

I’ll admit that the mud run was about the toughest and most unsanitary thing I’d ever done in my life but I’d be lying if I didn’t say it was also one of the most memorable and fun. It’s a party atmosphere at the event and all participants get a free beer at the end (although I ended up giving my ticket to someone since I don’t drink). My finish time was 46:47.5.

As far as the course goes, it’s crazy. There are obstacles such as tires, walls, hills and of course, mud pits. Most of those are not too bad to deal with but crawling through the mud pits proved to be tough for a few reasons.

First, there is netting above the pit so you have no choice but to crawl on your belly to get through. As the run continues, the netting gets lower so by the last one you are up to your chin in mud.

Second, the mud is more like infield clay from a baseball diamond so it will really do a number on your knees if you aren’t careful. I survived without much damage.

Also, it’s hard to wipe mud from your eyes when your hands and shirt are covered in the stuff. Next time: goggles. Another thing to remember is that regardless of how light an outfit you wear, it will still absorb liquid and that weighs you down like mad.

So how did I fare? Here’s how I went into it…

Great event, great volunteers, great crowd. There’s just not much more you can ask for.

Well, except for maybe eating one of these afterward:

This here is a 1/2 pound Steerburger which from Boll Weevil, a restaurant with locations only in the San Diego area. All my life, I’d been going to the original one on Midway but it was closed down years ago. Whether I was in town to visit relatives or go to a ballgame, I never made a trip to San Diego without going home with one of these babies in my belly, and Saturday was no exception.

I’ll work off the calories later. I was enjoying the day too much at this point.

Afterward, we decided to make a trip to the Rainbow Sandals store which has been producing handmade footwear since 1974. They closed at 4:30 and we made it there from San Diego by 4:25, just enough time to grab what I had already planned on getting: a new pair of single-layer fish strap flip-flops, the main material being hemp.

The quality of the product is nothing short of excellent even if they are a bit pricey and until you’ve worn a pair of Rainbow flip-flops, you’ll never justify spending more than $5 on a pair. You’ll never find a pair that fits better and lasts longer.

We justified ours to the tune of $55 for two pairs. Call us crazy but hey, they last. So long, in fact, that people often send their old ones back to the store with a  story about how long they had them, what they’ve gone through, etc. They are hung about the place.

So with that long Saturday behind us, we came home to contend with the mess that has started on Friday while I was at work:

Yep, a virus wiped out our hard drive. We tried everything we possibly could and nothing would revive it. This, my friends is why you back up everything at least once a week. The good thing is that since I do exactly that to my 2TB external drive every Sunday, nothing was lost. I’m now using Ann’s computer since mine is the one you see in the image above.

I’m currently looking at other options. With my raise and working the second job, I may end up getting something sooner than I think. But in the end, yeah, it was indeed a busy week.