Let me start this post by stating that along with glamping, I despise the word staycation. I understand what it means but it just sounds ridiculously stupid.

Anyway, with money being a bit tight the last few weekends, taking mini staycations (*shudder*) is exactly what we’ve been doing lately. Living in southern California pretty much means there’s always something new and interesting to see and chances are it’s going to be pretty local, and it also gives us an opportunity to take in some of our more historical landmarks as well.

We started a few weekends ago by taking Anthony to the Cabrillo Marine Aquarium in San Pedro, a city near my old stomping grounds of Wilmington. The place is very small and can be walked through in about an hour or less but still has all sorts of interesting things to look at, even a few dorks inside an aquarium:

A short drive from there is the Korean Bell of Friendship, a gift from Korea to celebrate America’s bicentennial in 1976. It’s huge, beautiful and extremely picturesque:

That’s Anthony standing in front of it. Here’s another shot taken with my phone:

The bell sits atop a hill in Angels Gate Park, formerly a part of Fort MacArthur. Adding to the bell’s ambiance is an unbelievable view of the coast that will take up your peripheral vision when you stand just right. This shot was taken just to the west of the bell (on a near-perfect day, I might add):

It was so clear that Catalina Island looked to be within swimming distance. And if you look closely at the photo above (click to enlarge), you can see some military vehicles on the extreme right and in the parking lot – except they’re not real. They are props for a movie or TV show that was to begin shooting there the following day. Also, the gun range (wood structure) just above my watermark is a prop.

The park on the hill is just an amazing place to spend the day as many locals do. There’s always a good breeze up there so naturally, kite flying is a popular activity:

To go along with the bell and the sense of peace and tranquility that the park brings are the remnants of Fort MacArthur. It’s a weird combination: 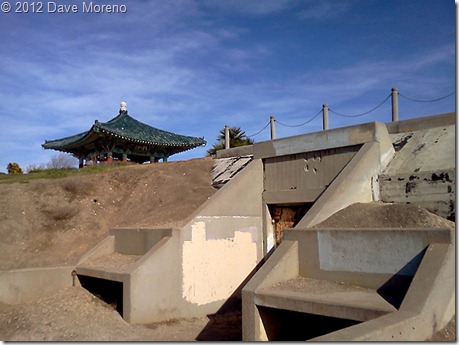 All in all, it was a great way to spend a day on a budget, which is what we did just last weekend when we spent some time in my hometown of Wilmington. I know, you’re probably thinking that there isn’t a lot to do there and you’re probably right, but Wilmington has quite a few ties to the Civil War and maritime history. In fact, if not for Phineas Banning, the Port of Los Angeles probably wouldn’t be here today. The port was his idea and the city is named after his hometown in Delaware where he moved from in 1851. His home sits in the middle of Banning Park, a place I spent many days as a child, and was used in the movie Primary Colors.

Another historic site in Wilmington is the Drum Barracks, a place I shamefully admit I’d never set foot in until last weekend. Indoor photography is not allowed so I don’t have any shots from within the mansion but I do have this artsy-fartsy one:

I learned much from the tour and was glad we took it. I had no idea that the Drum Barracks is the last remaining building of the over 20 that once stood on the surrounding area, nor that it was once a schoolhouse. The things you learn in your own backyard…

Down the street from the Drum Barracks is yet another piece of history – a Civil War powder magazine: 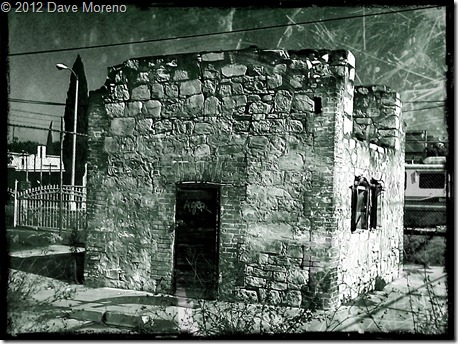 Yeah, I got a little carried away with Pixlr-o-matic app but it adds a little oomph. Although you can’t see it, the magazine is enclosed in a chain link fence.

Another piece of history in the area is the first Wienerschnitzel, a place that Dad took us to all the time. 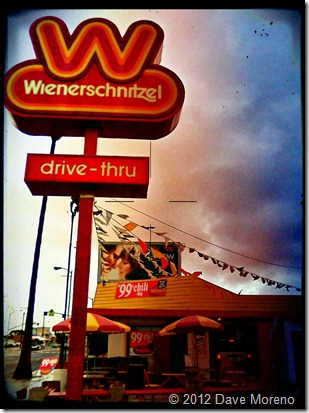 Yep, here’s where it all started. We also took a trip down to the docks where Dad used to work. Even though some may not find it much to look at, It still holds a place in my heart and I have a very strong emotional attachment to the area.

One of the things I remember about being near the docks are these fantastic pedestals which based on their style, appear to have been made during the Art Deco era:

The end of Avalon Street is lined with them and man, if I could have one of these in replica, I would be eternally grateful. It may be hard to see on this picture but those huge fins actually have images of fish engraved into them but over the years, the weather and sea air have taken their toll. But I was happy to see that some of them have all new fins on top which is probably what they looked like when they were installed:

They are a little rough around the edges but I applaud whomever is behind the restoration. Dad would have been proud.

This station is actually down the street from my hometown in the city of Carson and as you can tell, not much as changed from the time it was used in the show:

Seems like a lot to see in only a few weekends, no? Believe me, there’s much more.

Hope you like what I posted here. There will be more when we head to our next local destination – wherever that might be.