There have been a few scenarios in my life that couldn’t have been predicted by a psychic.

The first scenario involved me being in a white Ford Econoline van with two practically complete strangers, driving up Highway 71 from Arkansas into Missouri looking for alcoholic beverages and girly magazines.

Sound outlandish? Believe it or not, it happened in December 1993 when I was working for Wal-Mart and spent two lovely weeks in Bentonville – a dry county in the middle of the Bible Belt. I’ll tell you about it sometime.

The second scenario was when I found myself jogging up Sunset Boulevard in West Hollywood in the morning with a used coffee maker in my hands.

But that’s exactly what I did today.

Today is National Coffee Day and to celebrate, The Coffee Bean and Tea Leaf was offering consumers the opportunity to exchange their old coffee maker for one of their brand-new single-cup Kaldi machines (retail value of $179.95). The only stipulation was the your exchange had to have the cord still attached and there was a limit of one Kaldi per person.

When Ann saw this on Facebook she couldn’t decide if she wanted to go for a number of reasons. It wasn’t until late last night when she decided that it might be worth the risk of braving the heat and crowds to get close to $400 worth of coffee makers. And with a limit of 2,500 to give out between 11 am – 5 pm, we chose to leave the house about 8:45 this morning.

Driving through the Hollywood area is no big deal to me. I spent many days there as a teenager and know the place well enough to get anywhere. I knew exactly where the event was.

When we arrived in West Hollywood, we saw that the line was already curling about four blocks. To avoid the hassle of parking on the streets and putting money in a meter, we ended up paying $10 to park in the parking lot of The Viper Room. You know The Viper Room, right? Where River Phoenix OD’d? That’s the place.

Once we parked, we had to lug both of Ann’s coffee makers up Sunset Boulevard and that’s when my surreal scenario took place. In order to get a new Kaldi, you had to get a wristband from one of the event organizers so Ann told me to go ahead of her and Anthony and reserve my place in line.

That’s when I left them behind and jogged up Sunset, fulfilling my surreal experience. I then crossed the street, got my wristband and held our place in line. This was the view looking west down Sunset Boulevard.

There were still plenty of wristbands by the time I was in line so I called Ann and told her to take their time. They did. Ann got her wristband and we were both guaranteed a Kaldi machine. 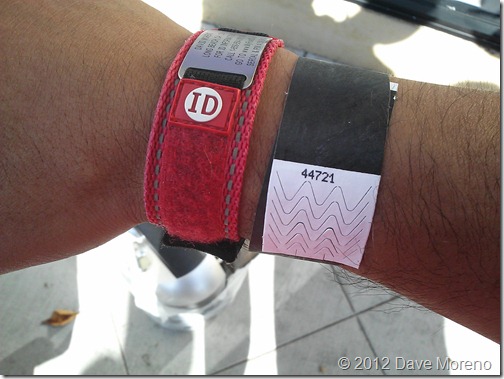 Then the wait began. And it was very hot with spots of shade but nothing we stayed in for an extended period of time. Also, for those who didn’t plan properly (like us), you had to stand or worse, sit on the sidewalks – not really recommended in Los Angeles. Fortunately, the woman in line behind us was nice enough to Ann borrow one of the two chairs she had packed. I stood the entire time. We chatted with her and her family the entire time in line and they were such great people.

About the only things we brought with us were bottles of water and Gatorade and believe me, they came in handy in that heat. I later ran into a pizza place to grab a few slices to eat while we waited. It hit the spot but again, standing in the heat takes more out of you than what you can put into you. I kept the pizza box and used it to fan us down when we couldn’t find the shelter of shade. And when you can’t, you improvise. 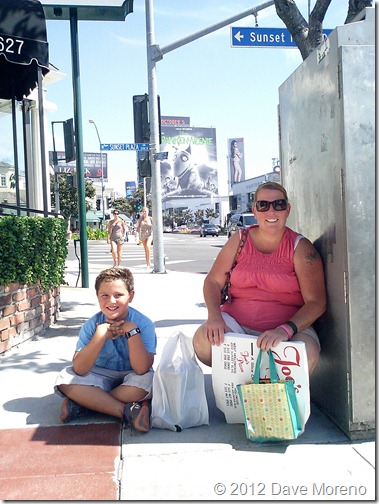 When the line finally started to move, we saw plenty of interesting things like Mel’s Drive-In…

…the KTLA news van since they were covering the event…

…and then this, which happened right in front of us.

A woman – sitting on the right in the light blue shirt – apparently had a case of heat exhaustion and needed the aid of Los Angeles’ finest. She was eventually taken away in an ambulance and the situation held up the line for about 15 minutes. The poor woman waited all that time and won’t have a thing to show for it. I hope the Coffee Bean folks can track her down and give her what she was waiting for.

After about three hours in line, we were inching closer to getting our Kaldi machines. Then we finally crossed the final street and saw the light at the end of the tunnel. 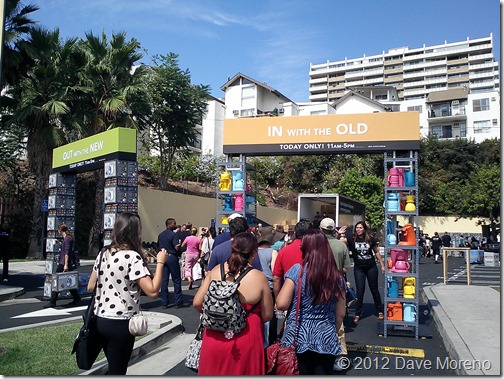 We had finally made it. High-fives from the CBTL workers. Once we crossed the threshold we were directed to a table where we turned in our old coffee makers and were given a certificate for the new one. 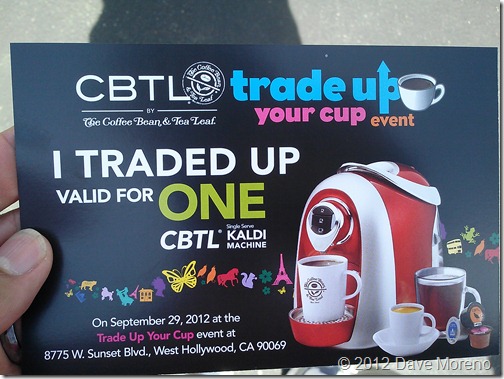 We then walked over to what looked like a wall of brand new Kaldi machines, gave our color preference (red, blue or silver), and turned in our certificate.

And with that, we had our new machines and the wait was over. I tweeted when we got our machines and CBTL responded.

Ann took the red one and we are saving the blue for a Christmas gift for some lucky person. Despite the heat, it was definitely worth the drive and wait to get something totally free – okay, in exchange for something old. The value of the machines also made it worth the trouble.

Whew, what a day! We’d like to thank The Coffee Bean and Tea Leaf for offering such a fantastic deal. You put a smile on Ann’s face and no doubt will make another coffee lover’s face light up on Christmas morning. And in this tough economy where there’d be no other way we could even dream of buying, let alone giving, one of these machines, your generosity is greatly appreciated. You have definitely earned our loyalty!

#Dancers at #OlveraStreet on an absolutely gorgeous Saturday. This was one of those times I wish I had brought my zoom lens. Lesson learned.
(Repost from 2021 since @haferann likes this picture.) Cancer is the one thing that will mean absolutely nothing to you until it affects someone you love. That was the case when we found out Ann was diagnosed with #kidneycancer over three years ago and it sent our world spinning out of control. But we had a choice: cry about it or get mad and fight back — and fight we did. We remained strong and she battled through it with the help of a team of amazing doctors, specialists, and surgeons. I’m thankful for all of them for the role they played in saving her life and am proud to say that she has been cancer-free for over 4 years. On this #WorldCancerDay, I’m posting this picture to raise awareness for @su2c and the work they do for cancer patients. With their help, maybe one day we can #KissCancerGoodbye for good. You can donate via the link below the picture. #fuckcancer #fcancer #kidneycancersurvivor #fightlikeagirl #su2c #standuptocancer
@depechemode are releasing their new album #MementoMori in March and to promote their new single “Ghosts Again,” a cryptic #mural went up in downtown Los Angeles. Aside from the flower arrangements shaped as #angelwings, the only other thing on the wall is a QR code that leads to an Instagram filter which brings the mural to life when scanned (see last shot). In the #FujiInstax shot, I’m wearing my original tour shirt from 1993’s #DevotionalTour — arguably their best. Unfortunately, the sign that had been placed there by @themoderoom and the flower arrangement for Fletch weren’t there when we visited. This mural was our only reason for going to LA today but it turned out to be a 7-mile walking adventure around the town with tons more shots taken. Stay tuned for more in the upcoming days. If you want to check out the mural, it’s near the corner of 8th and Los Angeles streets in the Garment District.
About five years ago @ciclavia in my hometown of Wilmington, CA, I came across this old, weathered sign (second pic) that I thought looked pretty cool. It was hanging from the side of a building on Avalon Boulevard, the Main Street in Wilmington, and looked to be from at least the 1940s or earlier just judging by the fonts used. I took a picture of it and don’t recall posting it anywhere but it recently resurfaced via @timehop so I thought I’d draw it and give it some new life. Part of the fun was having to redraw parts of the “Repairing” portion of the sign that had broken off over the years but I think my knowledge of typefaces came in handy with that. The #palmtrees were added only to give some depth; I didn’t spend much time giving them a lot of detail for that reason. Also, I drew it more proportional as if you were looking at it from eye level instead of looking up. I’m pretty pleased with how this turned out — it took a few nights — and especially glad I took the picture because if you swipe to the last shot from Google Maps, you can see that it has since been removed. I really hope that someone decided to restore it or at the very least take it home as a keepsake of a bygone era.
Sore muscles forced me to take a gym break and go for a 7-mile walk today instead. It was 37° F when I left the house which made for some frosty scenery.
More film shots from around San Francisco. Still have some stuff shot on my phone; deciding which ones to post.
Join 332 other subscribers