Having the week off and doing some shopping has given me a better perspective on what I do and my thoughts on leaving the profession which I was considering earlier this year.

I’m very fortunate in not having to deal with demanding customers (or any for that matter), working on my own most of the time, not being under the constant eye of supervisors or being micromanaged, listening to my iPod while I work, getting two raises in two years, and being paid more than minimum wage in an economy where such a thing is pretty rare.

The raise, by the way, is inclusive of my last review which was positive. It will kick in when I return to work on January 2nd. It’s not a lot but will at least cover the cost of gas I put into the tank for the 200+ miles I drive to and from work each week.

I’m also very lucky in that I’ve never, ever had to flip a burger – at least for a paycheck. I’ve done it many times on my BBQ (when I was fat used to eat too much red meat).

Of course, the downside of all of this is being a contacted worker and going to the office with the knowledge that every day could be your last. I’ve seen it happen many times to great people and it’s not a very pleasant experience.

But the bottom line is that I’m just pretty gosh darn lucky to still be there considering my position was intended to be temporary, lasting only two months from October 2010. And from what we’ve been told, 2013 promises to be yet another busy year for us with tons of projects in even more languages than we already proofread.

It looks like we’ve already got our work cut out for us, which could take me into my third year on the job.

As seen through Anthony’s new telescope. Taken with my LG Optimus Elite and edited with Pixlr Express. 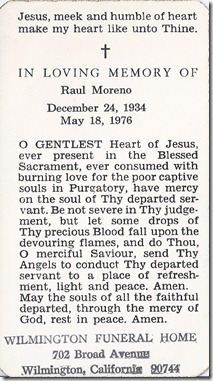 He would have been 78 today.

Happy Birthday, Merry Christmas, and rest in peace, Dad. We all miss you.

It’s Friday. You’re saving your energy for a 5-mile run tomorrow morning. And much to your disappointment, no fire or brimstone rained down from the heavens as was (sort of) promised by the Mayans and their wacky calendar.

You’ve also got no blog topic to speak of but you feel the need to write. Well, that’s what Friday Five is all about! Today’s topic is, appropriately enough, It’s Not the End of the World so here we go.

What’s something gross you’ve seen or tasted recently?
Let me think about this one. Oh yes, I know what it was. I tried a piece of homemade rum cake a few days ago and it was a bit too rummy for me. I gave it the old college try but only after a few seconds in my mouth I had to spit it out. No es bueno. Besides, I’m a bit of a teetotaler.

What movie this holiday season are you most looking forward to?
Without question it’s The Hobbit. I read the entire The Lord of the Rings series way back in 8th grade and fell in love with them all over again after finding all three books at a thrift shop. Naturally, I will seek out The Hobbit in paperback form and read it once I’m through the trilogy, currently near the middle of The Two Towers. (Side note: I had to drag Ann to see The Fellowship of the Ring when it came out but by the end she curious as to what happened next. I smiled and said, “Read the next book – or wait until next December.” She waited for three years to see them all and never read the books.)

What specific, annual part of this season most makes you feel all the positive feelings again?
New Year’s Eve. It’s a time to reflect upon everything that happened in the last 365/6 days and see what could be improved upon. The beginning of a new year brings with it so much promise but in the end, after the ball as dropped and the drinks consumed, it seems like just an ordinary day. It’s also a time to see all of the resolutioners start their exercise programs. The trails will be filled in January then empty and left for us regulars again in March.

What are your thoughts on eggnog?
If it wasn’t made from milk or so damn fattening, I’m sure I’d drink it all day. There is a soy variety but if I’m going to have freakin’ eggnog, it’s going to be the real deal.

As of 3:30 today, I am officially on vacation! I’m pretty jazzed about that despite the fact that we got swamped with work at the last minute. Well, not the last minute but at 1:30, the time we would normally be dismissed on a Friday before the company’s annual shutdown.

That’s right. We’re in shutdown mode until New Year’s Day and I won’t be returning until January 2nd. I’ve got 11 glorious days away from proofreading Magyar, Srpski and български*! The bummer? There’s rain in for forecast for the next couple of days so it could impede upon my workout program which will start tomorrow morning.

Either way, I’m looking forward to being with the family during that time and the good thing is that if it does rain, there may likely be snowfall in the local mountains. Sounds like a road trip to me. We’re also planning on going to see the Space Shuttle Endeavour at the California Science Center, checking out Chinatown, and maybe even a day or two of doing absolutely nothing.

That alone beats sitting at a desk for 8 hours.

I have to admit that last weekend was a bargain hunter’s dream.

First of all, we went to free event that was held at our not-so-local Sport Chalet store in Huntington Beach. The event was promoting and sponsored by the Steamboat Resort in Colorado and everything, I mean everything, within the confines of the arbitrary event boundaries was free: lunch, face painting, real snow for the kids to play in, balloon animals, snowboard lessons for kids, autographs from ski legend Billy Kidd, photos that put you on a slope in Colorado. It was definitely my kind of event and we all had a blast.

But the best part: spinning the wheel for prizes! There were no limits as to how may times you could spin the wheel so Anthony and I went back a few times. The result? 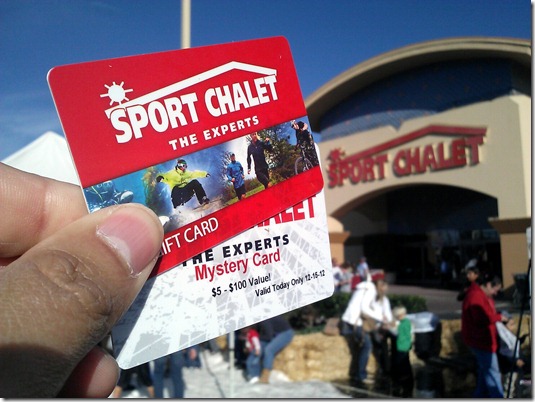 In addition to ski hats, lip balm, Steamboat lapel pins and bandanas, we won about $30 in gift cards. You can’t beat that! Thanks to Sport Chalet and Steamboat for putting on such a fun and totally free event. You guys rock!

But before all that, I wanted to make a quick stop at the local Goodwill to see if I could find a copy of The Hobbit (the book not the movie, you silly goose). It was at this very thrift store that I found copies of The Fellowship of the Ring and The Two Towers*, both of which I snagged immediately, so I figured I might have some luck.**

While I didn’t find it and will probably have to resort to buying it new, I did come across quite a few other things that a person on a budget was more than happy to purchase.

Up, up, down, down, left, right, left, right, B, A. Everyone knows that code and here’s the game that popularized it. This game was one of many that were sitting on the shelf and knowing the value of it, I decided that dropping a mere $3.99 for it was indeed a bargain.

How much of a bargain? The current bid high bid on eBay is $15.50 with just over a day left and 10 watchers. Yes, 10 of them. I get the feeling it will be going for much more than I expected. Not a bad ROI if I do say so myself.

I have two Brita pitchers in the fridge and I use them daily. In fact, Monte and Steve will only drink water that comes from the pitcher and not spigot water. (My cats? Spoiled? Nah.) At any rate, Ann found this floating around the store and at $9.99, I also saw it as a bargain despite the box being a bit bent out of shape.

How much of a bargain were these? Here’s what they sell for at:

Holy buckets, I’m scoring stuff left and right here. These I will use for sure – no reselling.

When you run, you get thirsty and unless you are running an event where volunteers are handing out cups of water, you’re screwed if you suddenly become parched.

Sure, you can carry a bottle with you but that proves to be cumbersome as well as very cold on chilly mornings. That’s why hydration belts were invented. You fill up the bottles with water or electrolyte-packed drink of choice, clip them on, strap the belt to you and you’re good to go.

And once I started running longer distances, I realized how handy having one of these belts would be.

The problem: price. They can run a minimum of $30 for a low-end belt with only two bottles or up to $46 for the model you see above which holds four bottles as well a pouch for storing a snack or device.

I found this item just randomly thrown in with the toys as it’s my belief that the employees had no idea what it was. If they had, it would have been over with the sporting goods stuff but I’m willing to bet that they thought it was some kind of NERF gun accessory.

Either way, I picked it up and held onto it once I realized that it was. Upon inspection I saw that the Velcro fastener had come loose but it wasn’t anything Ann and her crazy crafty glue from unknown country of origin couldn’t fix, which she did once I brought it home.

Oh, and how much was this, you ask? Does $4.99 sound like a deal? Winner winner, chicken dinner!

Between the filters and the belt, I paid $15 for stuff that retails for $76 – or about 80% off original MSRP. Plus throw in the $30 gift cards we won and the profit I’ll make on the game and I’d say that Saturday was indeed a great day to be a tightwad.

Not that I am or anything…

*I am currently on The Two Towers. The last time I read these books was in 8th grade and I was overjoyed when I learned they were being made into movies in the early 2000s. I saw them first-run and own them all on DVD (and after reading them again, I still prefer the books). Bet you never expected that from me, did you?

**I later found The Return of the King at another thrift store but still no stupid, fat hobbitses…