There was an eclipse on Monday! It didn’t get very much coverage in the press so I doubt you heard about it but I guess I was one of the few and decided to tell the family. Lucky for us, Ann’s parents also heard about it and bought us those nifty eclipse-viewing glasses.

But before any of that started, we had to make a run to 85 Café and Bakery to load up on some eclipse munchies.

Their cookies are bomb-tastic. So is their bread and everything else they make. Yeah, I know Krispy Kreme was selling their crazy-themed Eclipse Doughnuts or whatever but 85 Café sells their famous sea salt coffee for the amazingly low price of – wait for it – 85 cents on Mondays. And it was soooo good. I’d pay regular price for that over anything from Starbucks.

There was a window of about 2.5 hours here in California where you could view the eclipse which was only at 61% totality from this vantage point. The eclipse began about 9:12 or so with maximum eclipsage at roughly 10:21.

So we donned our glasses and looked up, and it’s pretty impossible to not look like an album cover for a German synth band* when you do that. 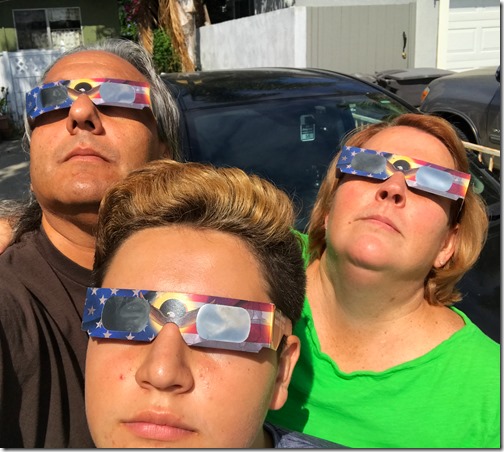 And do you know how difficult it is to blindly take a selfie? These glasses are pitch dark so I didn’t know what I was shooting, but I’m glad I have long arms to say the least.

Shooting others, however, is easy.

This is Anthony and his friend since toddlerhood. They’ve had their moments but a true friend always sticks around through thick and thin. I wish I could say that about certain other “friends” of his.

Lookie here! While the easiest way to view the eclipse without looking like a dork or burning your retinas like a goddamned fool is to simply poke a hole in tin foil and project that image onto a smooth surface, you didn’t even have to do that. Nature, as always, shows us the way by taking the sun’s eclipsed rays and shining them through the trees, giving you these crescent-shaped objects.

Stupid nature. Why does the “President” hate you so much?

Finally at 10:21, we reached maximum coverage for our neck of the woods. Friends in Missouri and Oregon reported that their street lights turned on and the cicadas started chirping. We weren’t that lucky but we were able to see this.

You could mess with your iPhone until the cows came home to get a decent shot but there’s a good chance you’d get an oversaturated, non-eclipsed blob. Not me. Ohhh no, not me.

I took this shot with one eye of the eclipse glasses over the lens of my iPhone. I then used MuseMage camera app for iPhone which allows total control over mostly everything. In this case, I chose a slower shutter speed (longer exposure) coupled with a high ISO (more sensitivity to light), and maxed out my zoom. All that to get this. Totally worth it.

I remember the last one and it was much better because the sun was giving off this really weird blue color. They say the next one won’t be until 2024. That’s not too far off and I’ll be eligible for senior discounts by then – which sucks.

Either way, barring my untimely demise, I’m almost certain we’ll be out there looking up yet again. And maybe the next one will get a *little* more press than this one.

*Yes, I know that’s a fictional band from The Big Lebowski. Just go with it, man.