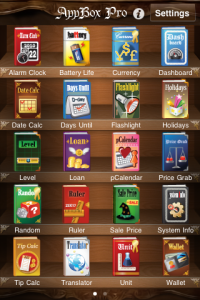 I have this cool iPod app called AppBox Pro that is chock full of somewhat useless gadgets: loan calculator, currency converter, battery life indicator, etc. I had the Lite version of this app but found it rather useful after playing with it so I gladly spent the 99 cents on the full version.

It also has a Date Calculator that allows you to add days to a certain date, countdown days until a special event, or figure out the day of the week that you were born.

One night I dialed in my birthday and discovered I was born on a Friday. Like I said, somewhat useless gadgets.

But while messing around with the Date Calculator, I thought it would be fun to figure out how many days I’ve been alive. So I punched in my stats and found out how many days I had been wandering this cruel material sphere. A little interesting, I had to admit.

But as they say, an idle mind is the devil’s playground.

I continued to punch in numbers, such as the number of days I spent with my Dad (from the day I was born to the day he died): 2,650. That’s it.

Curiosity finally got the best of me and I entered the following information:

I then added that number to the day I was born and came up with the date of July 10, 2010, which was yesterday.

And with that, ladies and gentlemen, it’s with a bit of mind-boggling hesitation that I strangely announce that as of this post, I have officially outlived my own father. And I have to admit that it’s pretty fucking weird to think about.

I had mentioned all of these dates in a previous post and said a few words about them there but now that the day is here, it’s even more awkward. I mean come on, my dad was DEAD at the very same age I am now. My head hurts thinking about it.

When I was a child, Dad seemed like a larger-than-life figure who was so much older than me. He was invincible, made of iron.

But he wasn’t and let his alcoholism get the best of him. He spent his last days in the hospital and his mother’s house where I remember seeing her practically spoon-feed him since he had gotten progressively worse with time. The picture is so vivid that, if I had an inkling of talent with brushes and gouache, I could make a painting of it.

At this point in my life, Dad faded away into nothingness. I can’t even fathom that happening to me and I can’t imagine how he must have felt sitting in that bed dying, thinking of the family he would soon leave behind. Maybe it’s a good thing that I never took up drinking or smoking, a choice I had made prior to knowing what he had died of (which I learned about in my 20s).

While I know I won’t completely avoid the Grim Reaper’s bony grip, I do whatever I can to make myself a little more illusive to his evil grasp: eating right, exercising, living clean, and knowing that I have a family to look after.

And as I sit here and blab about this monumental day, I can honestly say that with the help of all the aforementioned habits and commitments, there’s no way in hell I’m going anywhere any time soon, which means that you, my loyal readers–all two of you–might very well have to put up with my bullshit for another 15,121 days.

And for that I truly apologize 🙂