Whatever the circumstances may have been, it seems that I missed the last two TV shows I worked on. But hey, as long as there’s Hulu or networks posting each episode online the day after each episode’s premiere, I guess I’m in good shape.

That’s where I was able to see my brief appearances in the shows Outlaw and Law & Order: L.A. Here are some screengrabs from both.

First, here’s my part in Outlaw (and where I pretty much sat for two days of shooting, only to appear in this shot): 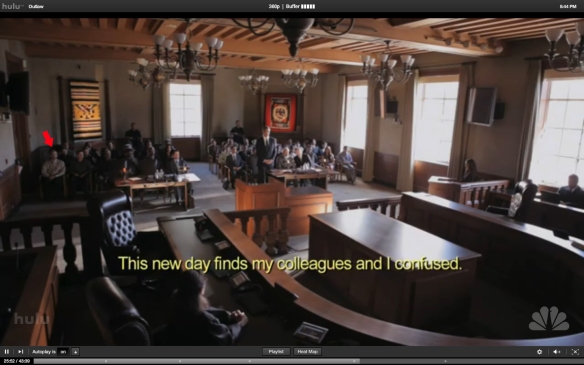 I had to throw in that big red arrow so you can get a better idea of where I was. The scene was supposed to be set in Mexico but it was actually Pasadena City Hall, where all of the courtroom scenes were shot. It’s an absolutely beautiful place.

Unfortunately, this would be the last time I would work with the cast and crew of Outlaw as it has since been given the proverbial ax by NBC. That’s usually what happens when the show just can’t find a comfortable time slot. I had a blast with the cast and crew who did nothing but treat all of us with dignity and respect. I wish them all the luck in the world.

Then there’s Law & Order: L.A. I watched the episode and wasn’t able to see myself very well but you know what? I was able to see my car: 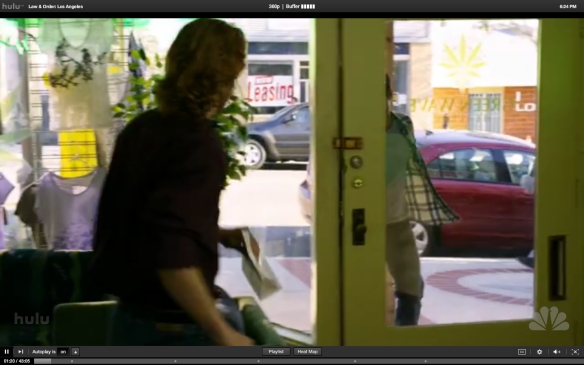 See the burgundy Ford Fusion parked right there outside the bogus marijuana dispensary? Yeah, that’s my car and what earned me an extra $15 on my paycheck for the day. Much like Outlaw, everybody with LOLA was a lot of fun to work with. Hope to do it again very soon.

And with those shots, my days of watching network TV in the hopes of seeing myself are done until I start booking myself once again, possibly after my contract is up with my current job. We’ll see how it all goes.