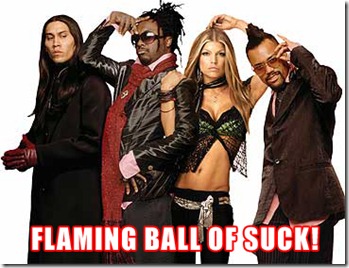 I’ve been saying for years that Black-Eyed Peas* suck great big donkey balls. I came to this conclusion back in 2005 or so when a co-worker brought in a copy of their then-new album, Monkey Business.

Willing to give almost anything a try at least once, she popped the CD into the player and let it spin.

I’ve simply got no words for what I heard except for “utter garbage.” There was not one moment of that CD that I would consider memorable—at least for the good. After about the third song I stopped the CD and said, “Okay, that’s enough. Sorry. That sucks.”

That brings us to 2011. This troupe of morons has won 6 Grammys, lending more credence to the notion that the Grammys should now, once and for all, be considered meaningless and without merit.

But apparently, nobody listened to me as Black-Eyed Peas* continue to sell horrible record after horrible record. As a result of their mysterious popularity, they were booked for today’s Super Bowl Halftime Show which I didn’t watch because a) I couldn’t care less about football b) or the commercials and c) all of the reasons I’ve mentioned so far.

The Los Angeles Times: “The Black Eyed Peas at the Super Bowl: Pop absurdity at its finest”

And here’s a collection of tweets from The New York Times. My own tweet was “Black Eyed Peas = one huge bucket of musical fail, #SuperBowl or not. Tell me I’m wrong.”

Now do you believe me?

Then there were a few comments from my Facebook peeps:

My cousin Pat said, “so… these are the black eyed peas…. hmm” while friend Casey stated, “What a horrible act to book for half time…. I have yet to see a live performance from them that is any amount of decent.”

Then there’s the comment on this post from a former co-worker, Tony: “And perhaps it should be “Black-Eyed PEES” due to Fergie’s tendency to urinate all over herself mid-concert (Google it).” I’ve seen it. I don’t need to Google it. Blecch.

Yes, I understand that every form of art is subjective and open for debate, and posting random Facebook thoughts and obviously negative articles might not hold much water with the point I’m trying to make which is, simply, this: can a group suck more than them, Super Bowl or not?

The answer is a simple no, no they can’t.

Unless, of course, it’s Jimmy Buffett.

*Note the addition of the grammatically correct hyphen

2 thoughts on “Now Do You Believe Me?”