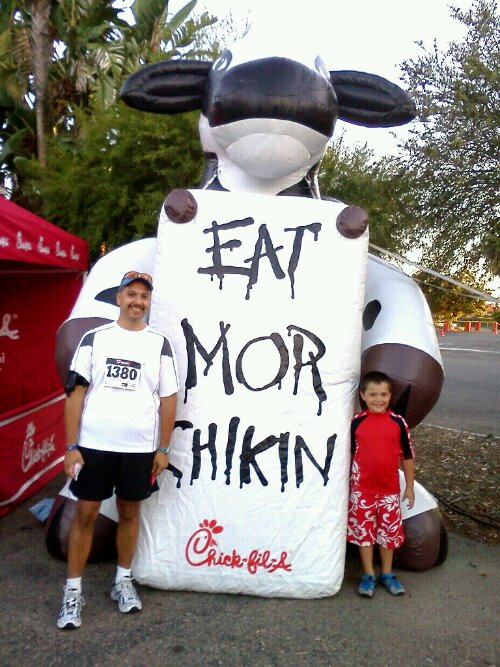 This was taken before the run and will post a few more taken with an actual camera (not phone) later.

Summary: finished in about 42:00 or so but I’ll post my official time when I get home. Right now I’m relaxing with the family at Wild Rivers where we had to run through a wading pool of sorts.

Had a great time and looking forward to doing it again!

UPDATE 8/28/11: Alright, since I’ve got some time to do it, here are some highlights/memorable events from the run.

The day started at 5am since I had planned on leaving by 6am to get there in plenty of time for the start at 8am. Irvine isn’t exactly a long drive but when you go to events like this, you just never know what the traffic will be like so it’s always best to plan for any unexpected delays.

We did get there in plenty of time so we checked out the few exhibitor booths that were there. I tried a sample of a drink called Body Armour and it wasn’t too bad so I need to look for that the next time I’m shopping. We sat around for about 30 minutes before I had to get in line according to my anticipated finishing time, do some pre-race stretching, listen to some of the rules, etc. 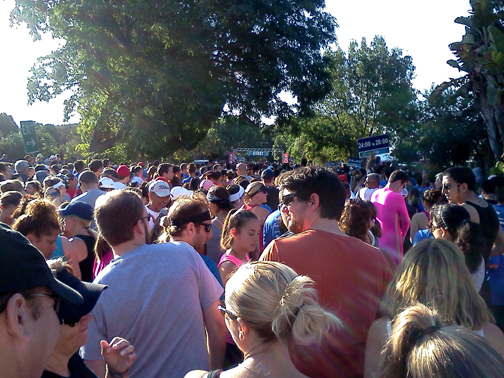 After the National Anthem and a prayer (more people seemed attentive to the former than the latter), the horn sounded and we were off. We trudged along through the parking lot of Wild Rivers and out onto the sidewalk the made a u-turn, where the first water station was. It was poorly manned and most of us had to wait for our water to be poured which is not good.

Despite that, I have to admit that I felt pretty good as I started on my way and at about the first mile, I was in my zone as I usually am. The run came back into the parking lot and started to wind through Wild Rivers itself for the first of two laps. During the second lap, we had to run/walk/wade through this (photo was taken after the run):

This was a most welcomed break from the rest of the course which at times was rather narrow and definitely blocked with walkers and people with strollers, who should have been kept at the rear of the field. Not only that, the wait to get into this Lazy River was just ridiculous as some people removed their shoes before entering.

Up until this point, according to my Endomondo app, I was averaging 11:30 per mile but my lap time for the last mile dropped dramatically as I “ran” through the river: 16:40. If not for that, I could have finished in about 34 minutes or so but considering the wait time and the conditions (but especially the wait time), this was not unexpected.

I crossed the finish line at 42:29 with an average pace of 13:14 according to my chip results. And in case you’re wondering what 5k looks like, here’s the course as recorded by Endomondo: 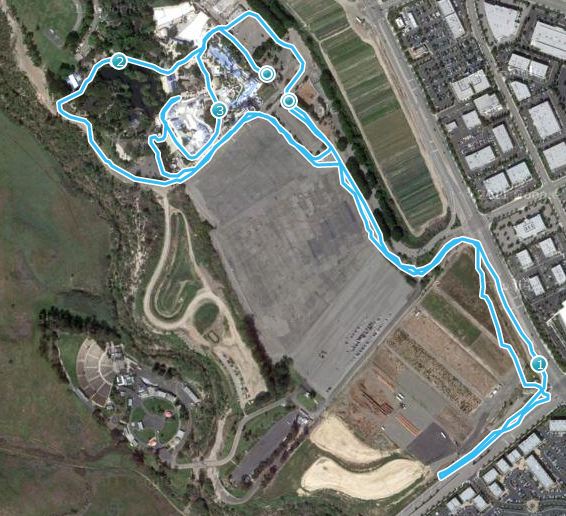 That seems like a good distance but once you’re up and running, it’s really not. Here’s the portion of the course known as the Lazy River, as noted by the dark blue line:

And although I didn’t finish anywhere near the Top 3 in my age group, that didn’t stop me from pretending I did: 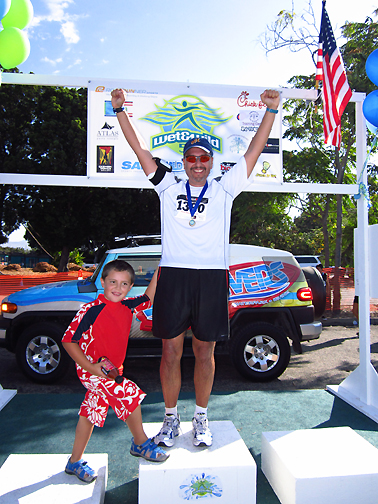 So despite the event’s flaws, I had a good time participating as well as hanging out at Wild Rivers afterward. Next event: the Long Beach Marathon Bike Tour on October 9, 2011. I started my preparation by buying new tires today so I’m ready for that one.

Oh, and those Asics running shoes I’m wearing? I bought them at Savers a few months back for a mere $3.50. They were practically new and half price on the day we were shopping, so that saved me some money for sure 🙂

By the way, part of the run is a challenge to “Beat the Cow” or someone running in a cow costume since the Chick-Fil-A is a huge sponsor. And if you do beat the cow, you get a free meal.

Did I beat the cow?

No, I didn’t. I got beat by a dude in a cow costume. But at least I wasn’t a sore loser about it:

I told the bovine I was disappointed for not beating them but there’s no shame in that. The cow consoled me with a friendly pat on the back. We’re cool.

I’m done for the night. My legs are starting to feel the effects of the run and I need to relax!