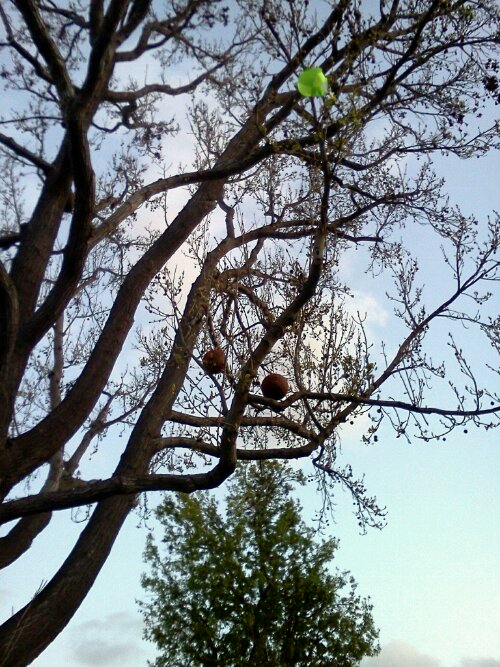 Posted from my Android

It looks like both of my contestants were correct! Thanks to Mary — a friend since we were in our teens — and fellow blogger Kimberly for their guesses. Read on to discovery why they are both correct 🙂

Okay, so here’s the story.

There are two Anthonys on the street with mine being the younger of the two. We call the eldest Big Anthony and mine, Little Anthony and ironically, both share the same birthday. Go figure.

Now that I think of it, there are three Anthonys on this street if you count Big Anthony’s father who goes by Tony. Yeah, it’s confusing.

But now that we have the names straightened out, it will make sense. See that green blob up there? That was a toy paratrooper that we bought Little Anthony at the Columbia Memorial Space Center last weekend. (That place, by the way, is a huge disappointment and I wouldn’t recommend it. It’s so bad I didn’t even mention going there until now and haven’t even posted pictures anywhere.) The paratrooper is a simple toy with a fabric parachute and plastic soldier and in order for it to get any velocity when throwing, it must be bundled tightly in the shape of the ball.

Once that’s done you toss it in the air and the chute will deploy and wow, it’s a party.

Big Anthony, however, wound it up a little too tight and tossed it too close to the tree. The chute failed to deploy and the paratrooper was caught on the branch as you see in the picture.

That tree is big and to reach the paratrooper by any normal means is impossible. So I decided to grab what I thought would be the solution: a basketball.

I spent the next 30 minutes tossing that thing in the air near the branch. If anything, it was great exercise: starting at my waist holding the basketball, I would lunge my hands down between my ankles and throw the ball in the air, fully extending my arms. Then, no matter where the ball went, I would run and catch it. Had to burn at least 100 calories.

Despite my valiant attempts, I just couldn’t get the thing off of the branch.

Frustration set in and I threw the basketball to Big Anthony and told him, “You got it stuck. You get it down.”

It took him at least three tosses before he — the one who got the paratrooper stuck — managed to get the basketball stuck. I shook my head and went in the house.

A few more of Little Anthony’s friends came over to partake in the spectacle. One of them went home to grab a basketball to try and knock the other one down so that the fetching could commence with two of them.

They threw it and…that’s why you see two basketballs in the tree.

There was no way a normal ladder would reach the thing but one of the kids brought their dad’s step ladder down and tried to reach the basketball with a broomstick. No dice.

In the meantime, I went into the backyard and found a few pieces of old pipe and joined them. (Fortunately, one was smaller than the other and was slightly bent so it fit perfectly inside the larger one.) The device I concocted was long, heavy and awkward. I grabbed it, walked into the frontyard, and got on the ladder.

With a few pokes, the one basketball was down. Another few pokes and grabs later, the paratrooper came down and finally, I prodded at the other basketball and down it came.

I have since instructed both Anthonys to never throw that thing near any tree as long as they both shall live.

But hey, at least it got me out of exercising for the night.

Strong mind, strong body.
Colors.
Now this is Richard. Nobody else trusts us get this close. Definitely have to add peanuts to this week’s shopping list since these little dudes don’t stop eating them.
Taken a few days ago as we headed out for our walk. This may or may not be Richard, the friendly squirrel we can feed by hand (see other posts).
Eight years ago, I drew an angry cloud while in a meeting because I was bored. I had taken that drawing into @procreate about a month ago and started to draw it again digitally but didn’t finish — until tonight. It’s nothing fancy but it kept my brain busy for a little bit, especially trying to figure out how to have a white background and transparent #lightning bolt so that I could have it with a sparkly sticker background (see second picture). The last picture shows the original drawing from 2013. As for why I drew an angry cloud? I have no idea. Maybe it was raining that day. Either way it was fun bringing it back to life.
Here’s another piece I did that won’t get any likes on Facebook since nobody there appreciates the effort or creativity that went into it. This is a #mashup of two characters: Cincinnati Reds’ mascot #MrRedlegs and #PopsMaellard from #RegularShow. With the two of them having such huge heads, I thought it would be fun to swap them — and here is the result. The yellow areas on the first drawing show where the holographic material of the sticker will be (yes, I’m making more). Swipe to see variations of uniform color and mock-ups made on @stickerapp that show how the holographic areas will look on the finished product (they will definitely be better), and the inspiration for this piece. I’ll keep messing with the color until I find the right combination. The SI logo on the jersey represents my other account @safeinsane where I only post my artwork.