While cleaning the other day, I came across these: 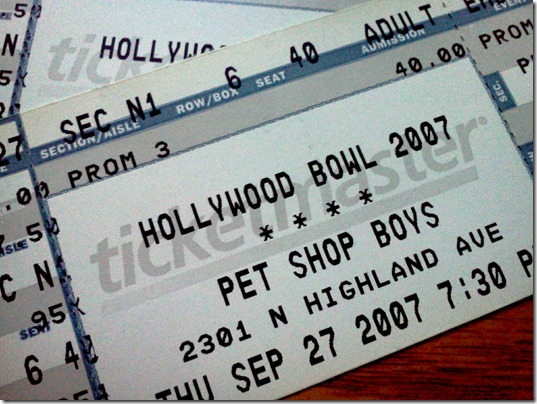 I love Pet Shop Boys. Still do to this day as they only seem to get better and their shows are just plain fun. So why would I have skipped going to see them in concert when their shows are such a production?

The show, their only L.A. performance, was cancelled.

The official explanation from the band was that there was an “scheduling conflict” that prevented them from fulfilling their Los Angeles venue obligation. But let’s be honest here: it was 2007 and interest in PSB in the U.S. was and probably still is minimal at best. (Heck, you probably didn’t even know they were still around and making new music.)

But because of this “conflict,” the show was cancelled and I was given a refund which was a bummer. I really wanted to see them, just as I did in 1991 when they were promoting Behaviour in their Performance Tour.

Oh well. At least I have these as souvenirs.