Today I received word that my beloved Uncle Lou passed away after suffering a stroke. And although my heart is in a great deal of pain as I write this post, I do it because Uncle Lou would have expected nothing less from me.

Uncle Lou, retired from the aerospace industry where we think he was involved in projects so rooted in mystery that he could not speak of them, was also a published author. I probably can’t say any more about this than I already have in this post some years ago.

And this is why I write holding back tears at the moment.

It’s especially difficult for me to accept his passing since, as writers (or a published writer and a charlatan at the very least), we both worked on the same wavelength and no doubt beat our heads over the same agonizing issues that writers routinely face. Only a writer would bother to continue their quest to put words on paper or online even after mentally beating themselves up.

He had enough in him to finish yet another book but the last few years had been trying for Uncle Lou. His health failing, he continued to plug along with the help of his daughter who confessed at one of the last family get-togethers that we had almost lost him a few times before that.

But to Uncle Lou, it meant nothing. I’ll never forget walking into my Aunt Mary’s house and seeing him seated and taking with other family members. I walked up to him and he stood up, smiled, hugged me and with his right hand weathered after years of labor in both industry and ocean treks, he gently grabbed my cheek and lovingly shook it. The bond we discovered years earlier had only grown stronger. I recall sitting next to him and drinking limoncellos as we chatted about his last book and what he was working on next.

And it’s that smile I’ll never forget. Writing aside, the only other thing that made Uncle Lou smile was anything having to do with water. His many ocean voyages are proof of this and for further evidence, one need look no further than this picture of him giving Anthony some lessons on how to swim. (That’s the very same pool I learned how to swim in with the help of, you guess it, Uncle Lou.)

And along with the ocean came the mystery. He would show up on your doorstep even if you had moved and you told nobody about it. It was his keen sense of, well, everything that earned him the right of being the family’s Mystery Man, or better yet…

I still think Dos Equis beer owes him a debt of gratitude.

During one of my last bike rides to the Seal Beach Pier, I decided to send him an email with the attached photo: 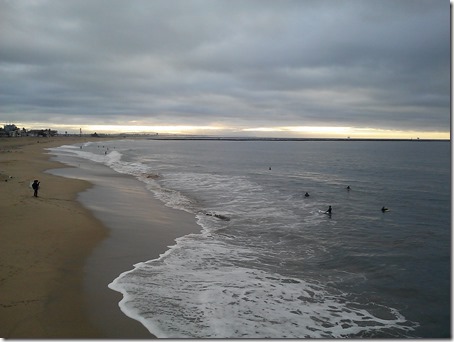 I rode my bike to Seal Beach Pier and thought you would like this picture. It’s gloomy out here but beautiful.

Hope you are well,
David

I never heard back from him which was my first indication that things were not well on his end.

A few months ago, however, he sent me a PDF of the cover of his last book, Soulsearch(ing). It seemed rather prophetic considering today’s news. Here’s the synopsis.

The soul does exist; it does have substance, and it does have a language. And all these things are something we already know exists. We know this intuitively, automatically. We have, however, in our own creative manner manipulated what we know into what we think.

Lou Cruz has always asked questions. These questions have taken him far and wide in search of answers, in search of the soul within him and what it is. Now, providing an amalgam of cutting-edge science, philosophy, and theology, Cruz presents an outline of his findings. The search has brought more questions than answers. Finding the soul is in part so difficult because we take its existence for granted. But finding it and accepting it could change our lives forever.

Today, my dear Uncle Lou discovered whether or not we have a soul and if the journey that awaits us on the other side is as dark, mysterious or wonderful as his were on this often cruel material sphere.

As of now, I have no information regarding his final arrangements but the only thing that would be appropriate for this old sea dog would be a burial at sea.

Rest in peace, Uncle Lou. I love you and miss you, and will continue to write just as you told me to.

Clash of the titans. A game for all time. A 162-game season came down to one game and one run. From the beginning, last night’s Game 5 of the winner-take-all NLDS between longtime rivals the Dodgers and Giants had drama. It began with Dave Roberts starting Cory Knebel instead of the NL’s only 20-game winner Julia Urías, who came in later and gave up the Giants’ only run to Darin Ruf by way of a bomb to centerfield. Oddly enough, it was Ruf whose swing in July at Dodger Stadium was ruled a check-swing, giving him another opportunity at the plate. The Giants won that game and ended up winning the division by one game. Last night only one run separated the two, with Cody Bellinger — having the worst season of his career — driving in the winner. And it ended on a check-swing by Wilmer Flores that was ruled a swing, giving the Dodgers the NLDS — just the opposite of Ruf’s swing in July. Both calls were wrong but neither are reviewable either, so that’s that. The Giants put up one hell of a fight unlike the Padres whose egos got in the way and caused them to end up 28 games out — and get their manager fired. This is a rivalry that goes way back to nearly the beginning of organized baseball and one that will continue long after I’m gone. And last night’s game is one baseball fans won’t soon forget — for any number of reasons and no matter who they root for. The Giants may have the NL West pennant but it’s the Dodgers who were riddled with major injuries to key players throughout the entire season, and the ones who were truly resilient enough to advance to the NLCS.
More shots from our exploring during @ciclavia.
Random toys seen on my morning walk. I often question but always appreciate.
“Swing Girl” by infamous street artist @banksy is hidden between two buildings on Broadway in LA. If you are walking down Broadway and aren’t looking, you’ll definitely miss it but it used to be much more visible before a building went up next to it. Thanks to local security who let me and the kid take a few shots from the front instead of straining through the locked gate. There’s always someone who seems to let us get the shots we’re looking for…
Not dead yet.
“Along came a spider…” I had started to draw this one out of sheer boredom when I was charging my car last week and decided to go a little further with it. The initial sketch was done in brown then I added different layers of color for the hair, shirt, etc. The #sketch layer was supposed to be used as a guide but when I started to add ink outlines, I didn’t like how clean they looked. The girl is frightened, so I figured the roughness of pencil would lend to the overall feeling I wanted to convey. And although they’re hard to see, the spider’s eyes are red. Swipe to see 30-second time lapse.