Years ago, Uncle Lou gave Anthony some pointers on how to swim and tread water.

When he saw that Anthony was having trouble with it, he dropped this piece of advice on him:

“A man can do whatever he wants.”

Naturally, he meant “whatever he wants” in terms of whatever he sets his mind to do. And while this was my first 10k, his words resonated during the entire run and helped me pull through.

The sold-out race started around 7:30 am with waves of runners leaving every minute and with me being in the 7th wave, it took some time to cross the starting line. But once I got going, I never looked back and the first half breezed by fairly quickly.

I continued and at about Mile 4, I slowed a bit to take some sips of water from the bottles on my hydration belt. I would only take a few two more breaks, one for each remaining mile. By the time I turned the corner and saw the Mile 6 sign, I was pumped.

I crossed the finish line with as much steam as I had in me and, once crossed, was handed my medal and immediately started to sob. It was pretty emotional not only for it being my first 10k but also for the fact that I dedicated the run and medal to Uncle Lou. It seems his words my guidance as I continued to run at a pace that was no doubt one of my best to date even if I dropped a few seconds from miles 4 through 6. The official results:

For those who don’t know, a bandit is someone — not considered a true runner by other runners — who sneaks into an event without paying but reaps the benefits by getting a medal. Keep in mind that running events take a lot of time to put together and benefit a variety of organizations. A bandit is a low-life who not only cheats a paying runner out of their medal but also the beneficiary out of their money. It’s a lose-lose for all involved. Just imagine if your kid finished their first 5k and, thanks to a handful of bandits, all of the medals were gone.

In other words, a thief. Not cool.

But it seems that there were a lot of them at this popular event and one of them even bragged about it on her Instagram feed. 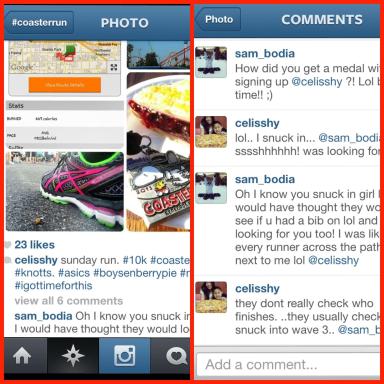 This was posted on the Coaster Run’s Facebook page. Looks like user celisshy isn’t all that shy if she is brash enough to bandit this run then go about bragging about it on Instagram — and tag it #coasterrun. Many runners began to criticize her and, curiously, her feed was soon made private. I hope she felt the guilt of it all, especially knowing she cheated kids out of their medals. The good thing is that the organizers have promised to give medals to those who didn’t get them as soon as they have more made.

Anyhow, I did take some pictures and they can be seen below in what is my first WordPress album ever! Note that these are a combination of photos from my phone, Ann’s phone and Anthony’s Samsung Tab.

And as for Uncle Lou’s words, yes, he was absolutely right. A man can do whatever he wants 🙂