I don’t recall where I was coming from or why I was there but one day I came across a huge banner in a nearby city that was advertising their annual Job Fair (or Job Faire if you’re one of those Medieval types).

I haphazardly made a mental note of the date – I don’t jot and drive – and added it to my Google Calendar as soon as I got home so I could have a constant reminder on my PC and phone as to when it was.

Well, today was the day so I put on my Sunday best and headed out to the location.

That’s when I realized how much I dislike these things.

First of all, parking is always an issue even when the economy is thriving. People are always looking for jobs no matter the reason or season but with the way things are these days, there are even more people looking for work (myself included). I ended up parking about a block away, fitting into a space that only a Toyota Yaris would fit into.

I then made the trek to the event where I was greeted by a line of people that stretched out the door. Fortunately, it was moving at a rapid pace so I didn’t have to wait too long.

Once inside, all participants had to sign in at a desk and listen to someone give details on a few forms they were handing out: a survey and postcard, the latter to be filled out and sent if you got a job that day.

And here’s the first issue I have with these events: nobody is actually hiring, per se. Sure, you can distribute your resume and fill out applications nine ways from Sunday but as far as leaving the Job Fair with a wonderful new retail position that will set the world on fire, yeah, that’s not happening. If anything, most of the employers are just a human element that searching online doesn’t provide and in the end, most of them will just hand you a flier with a URL that lists all of their available positions.

In other words, Job Fairs are just a congested way of conducting an online job search. You really are better off staying at home and using your Internet job website of choice. By going to a Job Fair, you’re just using up gas, getting dressed up, and dealing with a ridiculous parking situation and getting very little in return.

And there’s a lot less noise at home as well, unless you listen to Avenged Sevenfold while you job hunt which I may or may not do from time to time. Actually, it would serve me better to do that as opposed to dealing with the constant stream of talking from attendees and potential employers. To give you an idea, here’s what the view was like when I was in line waiting to speak to representatives from Mitsubishi. 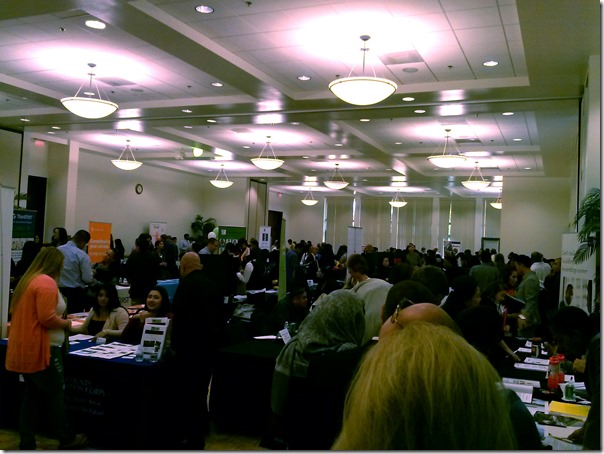 The pitch was such that it really was aggravating my tinnitus. I can handle noise if it’s at the right level but this was a little too much.

As far as the jobs go you have a cornucopia to choose from, most of which are sales, retail, and marketing. And the retail jobs at this time of year are no doubt seasonal so there’s no real hope in applying with any of them. There were also lots of companies I’d never heard of before who were also hiring for sales and marketing (which is obviously why I’d never heard of them). In the end, I spoke with about five companies and applied with only one that billed itself as “the Asian Starbucks” and is doing lots of expanding over the next few years. They were the only one who spoke with me at length and were beyond cordial, as well as the only one who didn’t look at me like I had lobsters crawling out of my ears when I told them I wanted to leave Walt Disney’s Wonderful World of Proofreading. In fact, they were sort of in awe at how someone could spend 40 hours a week doing such a tedious job. I was admired for a moment but who knows what will come of it.

Speaking of proofreaders, nobody likes them. It’s a fact. With the exception of the aforementioned company, every single company rep I spoke with (including Mitsubishi) sort of cringed when I told them I wanted to transition out of said career and into something else. It was akin to saying, “Hi! I have the Black Plague and would love to give it to you as well. Can we shake hands?”

Nobody apparently heard the “I want to transition out of this career” portion of my elevator pitch because they all said that they didn’t have anything in that field.

I spent about an hour meandering the hall in which the event was held and refrained from taking any candy placed on the tables. It was after speaking with Mitsubishi when I decided that a) this totally wasn’t worth the effort and b) maybe I shouldn’t mention that I’m a proofreader to anyone ever again. I’ll think twice before attending another Job Fair and keep on searching online as well as locally.

But the upside of going to a Job Fair?

You take home lots of craps.

But it’s still not worth it.