We really should appreciate the small things.

This morning, Ann took a walk outside to check on and water her freshly planted sunflower seeds. We recently planted a whole bunch of flowers and veggies to welcome Spring. I was in the house getting my stuff together as we were about to leave to go run some errands.

Just as I stuck my wallet into my back pocket, Ann started frantically calling me. I know that tone – it’s usually pretty important and I know to drop everything to see what’s going on.

I ran outside and there’s Ann, gazing at a big, beautiful monarch butterfly that was resting on her open palm. The butterfly, however, didn’t look like was long for this world as it was having difficulty maintaining its balance and probably the reason why Ann captured it so easily. They are sneaky little things.

I went in the house and grabbed my tablet to take a few pictures of this amazing insect.

Her wings were not flapping. She couldn’t stand for more than a few seconds before falling over again. But her legs still showed signs of movement, leading us to believe that she still had a little left in her but not enough to take her anywhere. We thought she was a goner.

Yet she wouldn’t give up. Ann placed her on top of the trash can, hopefully giving her a little incentive to fly.

Her wings were twitching a little as she stood there, still having trouble staying upright. I still wasn’t too sure she’d make it. Then I took her and placed her in my little zen space. 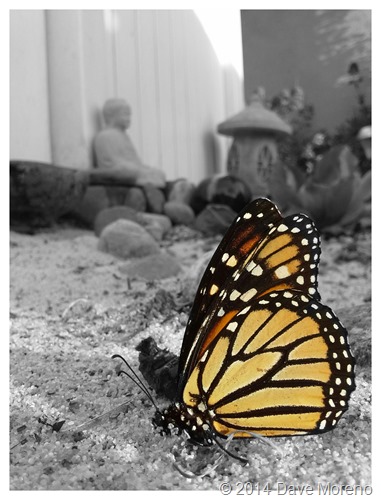 The sand apparently made it more difficult for her to move – and she fell over again and her wings twitched again. It just wasn’t looking good.

Then I picked her up and put her in a little patch of dirt and hoped for the best. She just sat there and fell over again. Poor thing.

Ann and I then went in the house and somehow got sidetracked doing something. Could have been laundry, I don’t know. The point is that some time had passed before we stepped outside again to finally go run our errands.

The first thing I did was look over at the dirt patch where I placed the butterfly – and she was gone. We both figured that a bird had grabbed her and eaten her, and it was all over.

Then I noticed something moving near the bumper of my car. The butterfly was under it, wings moving even faster than they had been before. She couldn’t quite get airborne and the power of her wings was dragging her along the driveway.

I picked her up by the wings to place her on the trash can and I could feel her fighting against the grip of my fingertips, ready to let loose. She was nothing like the butterfly we had found earlier.

I put her on the trash can and she stood there, wings gently flapping the way butterflies do. She wasn’t falling over, either. Then it happened.

Her wings went from that subtle flapping to complete and utter strength. They began to feverishly flap as she stood there and finally, she took flight. Ann and I watched her and yes, I admit cheering her on as she made her way from our frontyard, climbing ever higher and heading to our neighbor’s house. She was happily fluttering as if nothing ever happened. She seemed to like our neighbor’s tree as she flew about half the height of the tree and weaved in and out of it. She did this a few times before she finally got it together and flew off. Despite the odds, she had made it.

It was amazing. It was beautiful. It was humbling and metaphoric. It made our day.

And it’s a good reason why we should never, ever give up or take small things for granted.