I suck terribly at karaoke. It’s a fact.

But despite that, I have absolutely no shame and therefore I truly enjoy doing it. This would explain why I try to make it a point to get together with current and former coworkers once a month (schedules permitting) and head out to a local bar to sing ourselves silly.

The problem is that because we are regulars and the music catalog is rarely updated, we’ve pretty much done every song we’ve wanted to sing. Now it’s gotten to a point where a few of us bring in our own CDs with karaoke versions of songs we want to sing.

All of this leads to my recent acquisition of a mixer that my neighbor gave to me. He had purchased it for a radio project that never quite worked out so, knowing I like making a fool of myself, he let me have it.

Now you’ll probably wonder how this little box is going to work as a karaoke machine. Well, I’m going to explain it to you.

YouTube as tons of karaoke videos including pretty current ones. If you have Chromecast, you can stream said music videos to your TV which in my case is a 42” Sony HDTV. Once you set up the stream, it takes a little wiring to get things right: audio out from TV into mixer; mixer into equalizer; equalizer into surround sound.

Done and done. Now the only thing I needed was a microphone, the cheapest ones with XLR connections going for around $25 which isn’t that bad. I was willing to spend that much and be perfectly happy with everything.

So that was my goal for today: find a microphone. We decided to head out to a pawn shop in my hometown since we’ve found some pretty amazing deals there on just about everything you can think of: jewelry, musical instruments, even camera lenses back when I used film.

We looked around and didn’t find much of anything. I even asked the guy at the counter if they had any and he referred me to someone else who was busy helping another customer. Ann wasn’t feeling too good so I didn’t want to hang around much longer and we left. I felt kind of dejected knowing I was leaving without what I had come for.

I persuaded Ann into eating at a local burger joint that I used to frequent as a kid. She agreed and ate the bag of fries on the drive back, feeling better as we got closer to home. Never underestimate the power of a greasy spoon, especially one that has been around for so long.

One thing we noticed on the way out there was a ton of garage sales. I mean, tons of them. There had to be one at almost every other street but we didn’t think to stop at any of them being that I was on a mission. But on the way home, we drove by one and decided to stop by. There were a few bikes for sale that Ann thought would be perfect for Anthony (but they wanted too much for them).

We stopped and looked around at their wares, most of which was quality stuff and selling cheap. After Ann got a price for the bike, we walked over to the driveway to see what else they had.

And there they were, among the piles of sparkly sequinned dance outfits and shoes: two Panasonic microphones sitting in an old shoebox. I asked how much they were and braced myself. The adult daughter, who we later found out was the last child living at the home and was selling most of her stuff to move, looked at them and smirked.

I quickly reached for my wallet as if I felt someone trying to lift it from my back pocket.

“Here’s $5. I’m good with that. Keep it.” She tried to give me the extra dollar back but I refused. We looked around a little more and ended up taking this haul home. 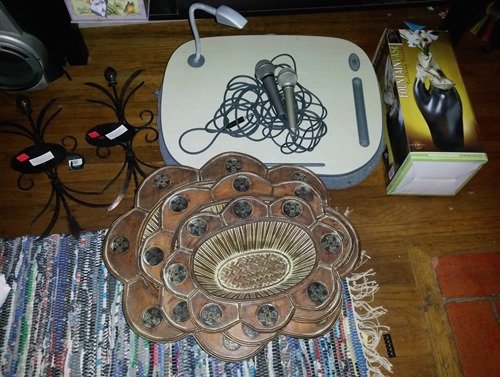 Two candle holders, a Brookstone lighted lap desk, fountain vase, a set 3 of decorative bowls and of course, two microphones. All of this for $20. Ann and I both scored and could have gotten more if we wanted to do a little demolition and rewiring to accommodate the $250 lighting set they were selling for $20. We decided to pass – too much work regardless of the bargain. An electrician I am not.

We got home and tried everything. Although the battery holder inside the desk is broken, it’s nothing a little piece of duct tape couldn’t hold together and it works perfectly. (This would be great if my laptop still worked.) The fountain has a small crack but it does not affect the performance of the flowing water nor does it leak.

Although they are not XLR connections, they both work and don’t sound too bad.

My homemade karaoke system is now complete and I was meant to find them today at such a bargain price.

2 thoughts on “Just What I Needed”