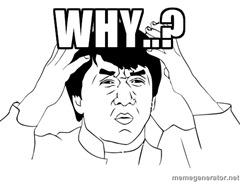 If you’re one of those who has a ton of pictures on your phone and is afraid to transfer/delete them, this post is for you.

As we speak (or as I type – your preference), I am backing up the 150+ pictures that currently reside on my phone. The 100-150 mark is my usual limit; more than that is just way too many.

With our phones becoming more of a capture-all-of-life’s-moments device and less of a phone, chances are that you have a lot of pictures stored on yours as well. Go ahead and look. There’s probably more than the 150 I’m transferring right now. But it gets worse.

I’ve seen screencaps posted on various Facebook pages that show the image being Number 1,987 of 2,242. If I get paranoid over a mere 150 images, you can imagine how jittery I get when I see something like that.

An aside: if you know how to screencap and upload to Facebook, why not just upload the original image?

But I digress. Man. Seriously. Why do you have so many on your phone? It’s time to TRANSFER THOSE THINGS! And right now you might be asking yourself why I care so much about the images on your phone.

It’s easy: they are your memories. You thought these moments were important enough to capture and save. I’ve seen Facebook posts from friends who have either lost their phones or had them crash or die, thereby wiping out all of their memories they thought were important enough to save. It’s not a fun thing to deal with, think about, or even have me preach about but the reality is that eventually, it will happen. Not might, but will.

This is why I follow Leo Laporte’s advice of the importance of backing up your stuff – images and otherwise – once a week to at least two devices: one local and one off-site. This ensures that your stuff is saved no matter what happens. And it’s a family thing: I also backup everything on their phones, too.

Owning a smartphone is more than just holding a little status symbol in your hand. It does require a little work, especially when it comes to backing up your stuff. And that work means learning a skill which I guess some might be too lazy to do or just don’t feel like learning, and that’s not good because the skill isn’t hard to learn.

If you are particularly fearful of technology, backing up images is practically a no-brainer with either iOS or Android, both of which offer a system of automatically backing up your pictures as you take them. Google gives you a decent amount of 15GB combined Gmail/Drive storage and 100GB a year can be had for a mere $2/mo. iCloud offers 5GB for free and offers larger capacities for a new lower price.

For the more daring, there’s cloud services like Dropbox and Microsoft’s OneDrive. Both of these require the installation of an app which like Drive and iOS, offer automatic uploading that can be set to WiFi-only to save on excessive data usage. Dropbox starts users off with a mere 2GB of storage but can be increased with referral bonuses or purchasing additional storage. (I’m currently at 59GB through referrals and a 48GB bonus earned with the registration of my Samsung Galaxy Tab 3 tablet). OneDrive gives you 15GB, the same as Drive but can also be increased with referrals. I’m one of OneDrive’s early adopters and was using it as SkyDrive, so my storage is set at 28GB.

Once uploaded to the ubiquitous cloud, your images are accessible via your device’s app provided you are connected to your network or WiFi. What that means is that it’s safe to delete them from your device and you will have two copies: on your computer at home and on the cloud storage service of your choice. You will have them. They are safe.

And if you really want to geek out, you can buy a WD My Cloud device which is your own personal cloud storage system.

It’s stored in your home and through the use of an app on your phone, allows you to send your pictures directly to it no matter where you are. Personally, this is going to be my next choice as they offer a huge amount of storage for the price: they start at $150 for 2TB. That’s a lot of selfies.

And guess what? You can still delete them from your phone after uploading.

Oh hey, look! All of my images are now uploaded and viewable on my phone plus can be downloaded to it if necessary!

I have them all organized in a Phone Pix folder then in subfolders by Year, Month, and Date Uploaded or Event. Not hard, and I know exactly where to look for things. Most services also allow folder sharing where specific users can add or delete files as needed. This is handy when, you know, you go out for Karaoke Night and your friends shoot incriminating videos of you.

With technology being such a big part of our lives, I can’t think of a reason why anyone should have so many pictures stored on their phone. It just takes a little patience to learn and time to transfer, both of which I’m sure most of us have. You could have uploaded/transferred a bunch just by reading this post like I did.

Don’t fear it any longer and risk losing all your images. Isn’t it worth the time to learn something so simple and have everything saved, or simply do nothing and lose it all?

Now I can’t make anyone do anything they don’t want to do but this doesn’t seem like a tough decision, does it?