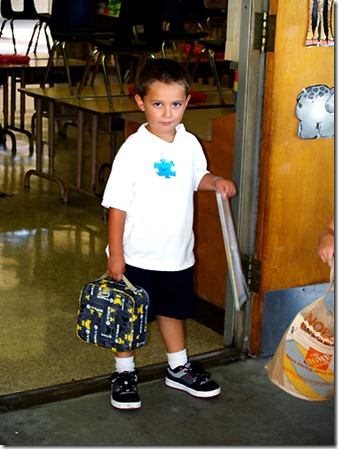 September 9, 2009: Anthony’s first day of kindergarten. If that look isn’t the deer-in-the-headlights then I don’t know what is. 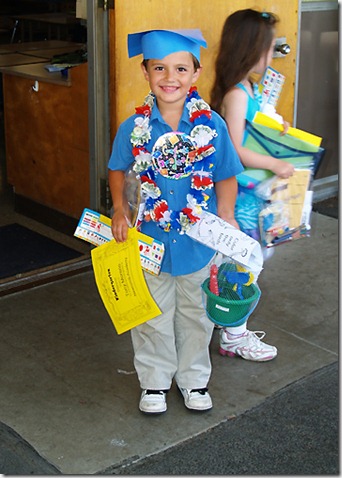 June 17, 2010: Anthony’s last day of kindergarten. His expression is definitely not the same as his first day. Where in the world has the time gone?

Either way, we’re extremely proud of our little guy for coming a long way in such a short time. I’d like to take a moment to thank his teacher, Ms. Shipp, for putting up with Anthony, for being such a great role model, and instilling positive traits and habits that will last a lifetime. And with Long Beach Unified School District facing massive cuts across the board, there’s no telling if she will be returning next year.

With that in mind, I gave her a great, big hug before we left for lunch. She deserved it.

I had made a promise to Anthony that I wouldn’t start seriously looking for a job until he was out of school, that way he can honestly say that I was there for most of his first year of school. And aside from that brief period of time I was working at that one particular hellhole (that Anthony boos each time we pass), I was there for everything and even attended his class picnic this last Wednesday:

I did all of this for him, and it’s something I’ll never forget.

Anthony, you made it! You brought your grades up from the last report card and I’m sure you won’t disappoint us the rest of the way.

We love you, kid. Congratulations!

I’ve been kind of quite lately but with reason: I’ve had two interviews and some tests at a place I’m quite familiar with, and I should be getting a call next week with their decision.

I’ll post the news either way, along with more details, once it all goes down. I gotta admit that it’s a little odd but hopefully it will work out.