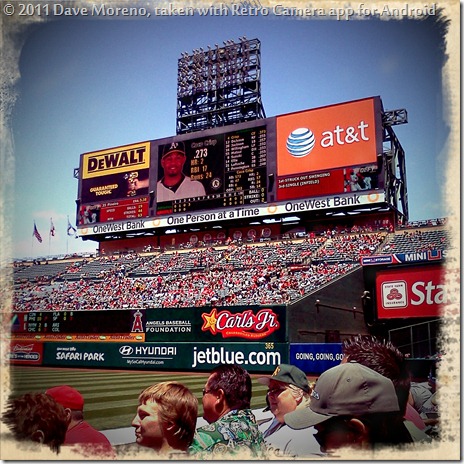 It’s not too often that I go to the ballpark. Frankly, while I love baseball, the cost of taking the family to a game is getting out of hand and I just don’t make the money I used to. That’s why whenever I’m offered tickets to a game, I gladly take them. It also explains why I’ve only gone to a few over the years.

The workplace organized a trip to the Angel game a few weeks ago so naturally, I signed up. Not only did we get admission but also a $10 voucher for food. That doesn’t get much but it’s something.

Anyway, here’s how the day went.

Can’t go anywhere without people asking for your signature or money. Holy shit, even before I’m in the place, I’m being hit up to sign some kind of petition for a measure I’ve never heard of before. Sorry morons, but I like to do my research before putting pen to paper since there’s always more to what you’re telling me. And then there’s those idiots in the funky pseudo-nurse outfits whom I never give money to in the first place. Call me a dick, but I ignored both of them.

Two foul balls that almost killed us. Our seats weren’t even warm yet when a foul ball came in the direction of the area me and my fellow co-workers were sitting. In fact, it was a row and a few seats behind me. Then, a few batters later, yet another one flew in our direction but wasn’t as close. Everybody was alright.

One of my coworkers was shown on the big screen. I should have gotten a picture of it but by the time I grabbed my phone and turned on the camera, the camera had turned to someone else.

Kid got hit in the face with beach ball; was crying over it. Either there’s a ton of homeschooled kids on Orange County*, some are out for school, or some ditched because for a Thursday afternoon game, there were plenty of them. A group of said kids was sitting a few rows in front of me in the section to the left. During a break in the game, one of them had thrown a flattened beach ball  into the face of a kid who I’d say was at least 10 years old. He immediately started to cry and say, repeatedly, “You threw that beach ball in my face!” The kid was way too old to be crying over such a thing and honestly, if it were Anthony, he would be plotting sweet, sweet revenge and I’d have to sleep with one eye open. Guess the kid never heard this advice.

Freaking hot out there. I regretted my decision to wear jeans once the sun broke through the clouds because man, was it hot out there. I appreciated the occasional breeze because we had no shelter as we were sitting in the field level (see first picture above).

Just. Stop. I really wish they’d stop playing this song before the team takes the field (although for years they played this one), and the Rally Monkey needs to go away. Whenever the Angels are losing, this video and a few others are shown on the screens in an effort to stir up the crowd. It’s Anaheim, and it takes more than a Rally Monkey to stir up this pink-hat crowd (read: start with a few apple martinis). In the end, the power of the monkey failed as the Angels lost to the A’s by a score of 4-3.

A sick mind never sleeps. During the game, I tweeted the following which was an embellishment of something I had witnessed:

Peanut vendor: “Who wants a great big bag of salty nuts?” Blonde: “Why do guys always ask me that?” #theaterinmymind

Beats working. But despite it being a hot day, a whiny crybaby, and the other minor inconveniences I experienced today, a good time was had by all. This definitely beat sitting in the office all day, proofreading until my eyes begin to bleed.

Many thanks to The Powers That Be for organizing this event. Much appreciated 🙂

*Still refuse to recognize it as “The [its initials go here]”