It had been years since I went to a ballgame so it was definitely a treat to walk through the gates and enter Anaheim Stadium, a place where I spent many a summer day in my youth.

The place has gone through a few major changes over the years. When I first starting going in the mid-70s, it was really nothing extraordinary. In fact, it was just a functional ballpark as most were back in the day. There weren’t even any bleachers beyond the outfield wall but some were added later.

Then in the 80s, it was decided the stadium was to be enclosed so that it could also accommodate the L.A. Rams. It went from a simple stadium to one hell of an ugly place that also hosted monster truck rallies (YEEEEEEHAWWWWWWW!) in addition to football games, which always bothered the hell out of me because few things are more sacriligous than seeing yard lines across centerfield. It’s just not right.

The stadium remained enclosed even years after the Rams split town. As a result, the place always looked cavernous and empty even if there were 40,000 people in attendance, since there were still 20,000 seats (not normally sold for baseball) that were vacant. This wasn’t necessarily good since Angel fans at the time were notorious for, well, not showing up anyhow. How do I know this? There were less than 18,000 people in attendance the night George Brett went 4-for-5 and got hits 2,997-3,000. Baseball history in the making and nobody decided to show up. But at least I was one of them in the photographer’s well.

When The Disney Company took over, they took that Frankenstein of a stadium and completely transformed it into what is one of the most beautiful ballparks in all of baseball.

That’s exactly why I felt like a kid again when my buddy Tim and I took our seats on Sunday. The gorgeous green grass that lay before us, the stadium hot dogs that tasted better than a steak (nostagically, of course), and the years of memories of watching some of baseball’s greatest play: Gwynn, Ripken, Brett, Molitor, Yount, Reggie Jackson, Nolan Ryan, etc. Although I’m a Dodger fan, Anaheim Stadium (as it will always be known to me) holds more personal memories than Dodger Stadium, a great ballpark in its own right.

But enough of me blabbing about yesteryear. Here are a few more phone-cam pictures I took that day, and click on each to embiggen. (Note: I hope you enjoy seeing other ballparks from a fan’s perspective because I sure do.)

The view from our seats. From there, you can see the traffic on the 57 freeway, trains stopping at the Metrolink station, the Ducks’ home ice of the Honda Center (formerly Arrowhead Pond) and, if the game is a blowout and it’s Friday/summer night, walk up to the last row of seats at 9:30 and watch the Disneyland fireworks. 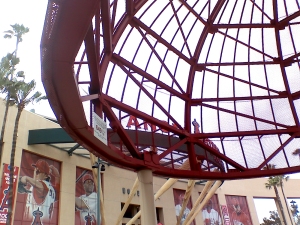 Outside the stadium are these two really big metal sculptures of Angel caps. My cap size is somewhere near 7 3/8; this one is 649 1/2. I think they used Reggie Jackson’s head as the models for these.

Also outside the stadium is a fan memorial for Nick Adenhart, a rookie pitcher who was tragically killed in an auto accident just hours after pitching 6 innings of shutout baseball. 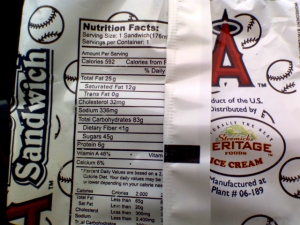 The 592-calorie, 25g-of-fat ice cream sandwich that set me back $4.50. Jiminy Christmas, I could go to the store and buy a gallon for that much, and I can’t believe I ate the whole thing. But hey, zero grams of trans fat makes it alright…right?

A statue of The Singing Cowboy himself, former Angel owner Gene Autry who holds the distinction of being the only person to have five stars on the Hollywood Walk of Fame: Movies, Radio, Television, Recording, and Live Theater. It wasn’t uncommon to see him at the games back in the day.

Well, this post definitely brought back some memories and I hope you all enjoyed the break from the profanity-laden posts I’ve been writing lately.

Oh, what the hell. Fuck.