You might recall a post I wrote in April in which I was debating whether to stick with Virgin Mobile or move on to T-Mobile since Virgin was going to make it practically impossible for users to avoid rate increases by implementing said increases upon the activation of any smartphone released after May 2012.

I thought long and hard about it and decided to stick with them by buying the Optimus Elite, and here is my review of the device which I’ve had for a couple of weeks.

Right out of the box, the Elite much more attractive than the Optimus V. It’s also thinner and lighter but taller and wider, and features flush-mounted front keys. Also, it no longer offers external microSD card access and is absent of a camera button. To get to the microSD card, you have to remove the back of the phone and slip it in. Upon opening the back you will see that the rear cover boasts an NFC antenna for the integration of Google Wallet and other uses. The good thing about the phone’s dimensions is that they are nearly identical to the iPhone 3GS so if you find any rubber covers on clearance for said phones, they will fit rather well. In fact, the Power button and headphone jack are in the exact same position as the iPhone 3GS. The only thing you’ll need to do is cut an opening on the back for the camera lens, self-portrait mirror and flash. That’s what I’ve done and it works great.

Camera/Video: There are plenty to speak of, starting with the camera whose resolution has been bumped up to 5MP and features a host of new options including an LED flash (finally), ISO selection, timer, Color Effect, adjustment of brightness before shooting, shooting modes (Auto, Portrait, Landscape, Sunset, Night, and Sports) and different shutter sounds. Note, however, that the shutter sound cannot be turned off. Believe me, I tried and there’s nothing that will kill it. So much for taking candid shots of your children sleeping in awkward places without waking them.

The one thing I have found is that taking pictures with the flash tends to produce blurry results; the camera can’t seem to figure out what to focus on. One way to solve this is to tap the subject on the screen before taking the shot. Doing so will make the camera focus on the subject you chose and produce cleaner results.

As a sample (unedited, non-flash) shot, I offer Anthony taking a swing of his club (click here for full size): 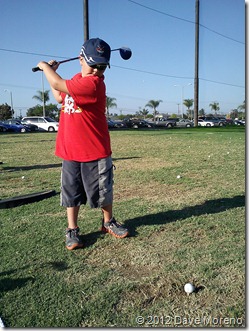 On the video side, users now get to choose from a few shooting options: MMS is designed for shooting a short clip and posting it online or sending to people, or Long Video which can be as long as your memory card can hold or battery lasts. The resolution options are as follows:

Note that MMS videos can only be shot in QVGA and QCIF modes and are limited to 25 seconds (a bar shows up at the bottom of the screen showing time remaining). MMS videos cannot be shot vertically but videos shot in TV and VGA modes can. Another nice touch is that the LED flash can be used as a light when shooting videos and the zoom now functions while shooting.

Memory: One of the biggest complaints I had with my Optimus V was the lack of adequate internal memory to store and run apps. I would constantly find myself uninstalling apps when I found a new one that I really wanted to have. That hasn’t been the case with the Elite which has 512MB and 4GB of RAM, enough to satisfy most app-heavy users.

For comparison, I had around 65-70 apps on my Optimus V with about 20MB of memory left. Once it dipped below 20MB, I would get the Low Internal Memory warning and have to start clearing out caches and SMS messages. With the Elite, I’ve installed nearly 100 apps and have – are you ready for this? – 540MB left. The additional memory, Android 2.3.7 (Gingerbread), and the 800 MHz processor make the phone a joy to use when compared to the Optimus V. It’s faster, has the memory for a plentiful amount of apps, and I’ve had less forced-closings. Note that I also have a 16GB card installed.

Internet speed also seems to have gotten better on either WiFi and over the network and with tons of memory to work with, you’ll be clearing out your cache for space less often. I had my cache up to 20MB and I was still viewing pages without much difficulty. To add to your browsing experience, Adobe Flash is also included int he preinstalled apps which means better video viewing on Facebook and elsewhere.

Visual Alerts: Another thing I didn’t like about the Optimus V was that it lacked visual notifications for missed calls, messages, etc. and in Silent Mode, you had no way of knowing if you got a text. The Elite still won’t give you a popup (which is why I still use the SMS Popup app) but you can designate the front buttons to flash as a notification for missed calls, etc.

Like the Optimus V, the Elite comes chock full of preinstalled apps which I would rather have the option to install. For example, it has a whole suite of Google apps including Google+, Messenger+, Wallet, Play Books, Tags, Shopper and Play Movies. All of those are pretty useless to me and I would rather have the over 50MB in storage they occupy for other stuff. About the only useful preinstalled app has been Play Music which never seemed to run properly on my Optimus V. On the Elite, it’s darn near perfect. I have to give Google credit, however, since all of these apps are much more useful than the preinstalled apps on the Optimus V: Twidroyd, etc. Granted, I will never use them but chances are someone out there will.

Speaking of music, the built-in music player has seen no change. It’s still as ugly as ever but functional and unlike doubleTwist, isn’t buggy when it comes to creating and saving playlists.

Unlike the Optimus V, you cannot use the Elite as a hotspot. Well, you can but as my wife accidentally found out, your account will be disabled (data connection cut off or Error Code 67) and you’ll have to call Virgin Mobile for a factory reset. You will lose everything. This has been well-documented in this forum so don’t bother trying it.

Despite what Virgin Mobile and LG claim, I’ve found that the battery life on the Elite is not as long as the Optimus V. That or maybe I’m just doing more with it and all of that playing around is taking its toll.

Going back to my first paragraph, I had some trepidation in choosing this phone as it would bump my monthly bill from $25 to $35. But has it been worth the extra $2.50 per week?

The Optimus Elite isn’t a gigantic upgrade from the Optimus V but it is indeed better in every aspect: camera, processor, memory, overall enjoyment. It’s not the biggest, baddest phone out there but at $149, it’s one that most budget-conscious users would be glad to call their own – and I’m one of them. In the few weeks of ownership it’s given me practically no trouble (maybe just a few force-closes) and works exactly as I need it to. So despite the bump in plan price, I’m very happy with it and if you’ve been using an Optimus V, chances are you won’t be disappointed either.