UPDATE 11/21/12: I have since received a very kind email from a Social Media representative from Fresh & Easy who assured me that the matter, although resolved, and the way in which it was handled will be investigated.

UPDATE 11/27/12: I have been in contact with said Social Media representative and I’m happy to say that the matter has been resolved professionally and tactfully. I have also been offered a gift card as a way to earn back my loyalty. This is customer satisfaction that went well beyond what I was expecting when I initially wrote about my experience and I thank them for taking the time to go the extra mile.

In case you hadn’t noticed, the supermarkets are getting a bit more hectic with people running around preparing for their Thanksgiving feast. Fortunately, we have had most of our shopping done well ahead of time but only needed the main ingredient: the turkey.

This is where Fresh & Easy would save the day – or so we thought.

You see, F&E was having a special promotion: if you spent $30 or more, you would get a free Jennie-O turkey (click to enlarge and see the details). 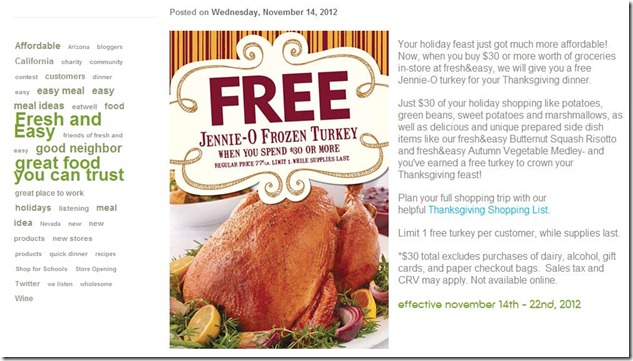 Knowing this, Ann went shopping on the 15th and ended up spending well over $50, a purchase which no doubt qualified her for the free bird. But when she queried an employee about the promotion, she hit a roadblock.

“No, we’re all out of them,” said one employee. Another one, rather snottily, told her that the promotion was for one day. This, despite the ad you see above clearly stating that it was for one week and while supplies last. This, also, despite the fact that there was a freezer full of Jennie-O turkeys clearly marked as being the promotional turkeys.

Ann’s not one for confrontations so she chose to send an email explaining her situation. The unedited reply is below:

I’m sorry to hear that you didn’t get the turkey for free like you had expectd. I know that they told you at the store that it was not free, but in order to get any compensation, all that is taken care of through the store manager. Thank you for choosing fresh&easy!

That’s it. And after reading it a few times I’m not even sure if this reply makes any sense – and it also reads like an eight-grade love letter. There’s no mention of bringing it to the manager’s attention, no apology (“I’m sorry to hear…” takes on an insincere tone and seems akin to “I really don’t care…”), or no offer to make things better and ensure that we will remain customers. Just a big F-U and on to the next one.

I even tweeted my annoyance with them:

@FreshandEasy: when having a promo, make sure your employees know. Had a fun time explaining why my purchase qualified for a free turkey.

@aeromat @aeromet, we're sorry you had a bad experience, I'll pass your concerns to our team.-Jim

By the way, I’m @aeromat not @aeromet. I have no idea why that extra one was thrown in there.

Now Ann may not be one for confrontations but they don’t bother me in the least so with receipt in hand, I drove down to Fresh&Easy last Saturday to take care of the matter myself.

As I was walking in the store, there were still ads outside showcasing the free turkey so it seemed obvious that they had some in stock. I made my way to the self-checkout lanes (they don’t have cashiers) and looked around for someone I thought would be able to help me.

At F&E, that’s asking a lot. One girl was making her way down the aisle to the checkout lanes so I thought I’d stop her and ask.

“Excuse me, I…” was about all I could get out as she continued to walk past me, not even acknowledging the fact I was speaking to her. Now it was on.

As she finished whatever was more important than answering my question, she walked in my direction and that’s when it occurred to her that someone standing there looking dumbfounded with receipt in hand just might need her help.

I explained what Ann had gone through and what she was told. She pretty much told me that it was a “while supplies last” deal and that when they were gone, they were gone. She also said that if I wanted to get the free one, I would have to spend another $30 to get it.

That was it. I spoke sternly.

“Okay. So my wife was told that it was a one-day promotion when it wasn’t, she was told that you were out when you weren’t, and now you’re telling me that I need to spend another $30 when we clearly did that already?”

I folded my arms.

You know, I try my hardest to not be a jerk in certain situations but when my buttons get pressed over and over and I’m given some kind of story AND have my wife lied to, that line gets crossed.

“What are we going to do about this?” I said. I didn’t bother asking for the manager because I figured that the store’s incompetent employees were probably a direct reflection of their poor training standards to begin with. Hell, for all I know, this girl I was talking to could have been the manager of the place.

But I wasn’t budging. She hesitated, looked around, checked my receipt, then finally agreed to let me take advantage of what was rightfully ours to begin with. She led me to the last aisle of the store and to the freezer which – get ready for this – was FULL of Jennie-O turkeys.

This will be the centerpiece of our Thanksgiving feast and a trophy of sorts in the little war that was waged between F&E and two of its customers.

And I will enjoy it.

So thank you, Fresh&Easy for the free turkey and making us jump through hoops of fire to get it. It’s situations like these that will drive customers to take their money elsewhere and which we are more likely to do after dealing with something that should have been so easy to resolve.

2 thoughts on “The Fresh and (Not So) Easy Free Turkey”