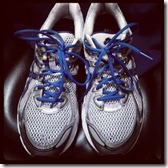 I left work early today so that I could attend an assembly at Anthony’s school since he was getting an award. I told him that I wouldn’t be able to make it since we were busy at work but, as I do from time to time, I surprised him.

And being that I made it home with little time to spare, I stayed in my work clothes and only changed my shoes – from dress to running, for comfort and because it was raining.

Once the assembly was over Ann and I waited in the car for Anthony and his friend who we watch on Fridays. Close to dismissal time we headed over to the school to meet them. By the time they were dismissed it was drizzling a little bit and the two of them decided to make a run for my car.

So I decided to have a little fun with them. I asked Ann if I should try to pass them up and get to the car before them. She agreed and off I went.

From a dead stop down the sidewalk I sprinted passing a few students and parents along the way. In the end I did beat them both to the car and as I waited, I noticed Ann approaching and laughing.

“Did you hear those kids?” she said pointing behind her.

Ann tried to regain her composure. “They said, ‘Wow, he runs pretty good for an old guy!’”

Woah woah woah, hold the phone, Mabel! For an old guy? What, because I have some spots of gray hair* as well as a graying goatee, that makes me an old guy?

Pfft. Whatever! It’s a state of mind, kiddies. You remember those words when you’re uh…older – say, in your teens – and can’t get yourselves to get up in the morning to exercise or don’t want to mow the lawn. This “old guy” turns 44 in a week and feels as fit as ever.

I’ll give you old.

Ahem. All that aside, I did get a compliment from the parents I passed who told Ann that I indeed run fast – period. She told them that I run every weekend and whenever I can and again, another compliment.

And that made me feel darn good.

But old? Come on, kids. I’ll take on your mom or dad any day of the week from a dead stop like today. Then you tell me who the old guy is 🙂

*It’s more than a “patch” but you know…oh well.