In the wake of Detroit’s Big Three getting handed a giant FAIL in requesting their bailout, I recalled a clip from the very first long-form music/comedy skit video ever made.

It was called Elephant Parts, a project dreamed up by former Monkee Michael Nesmith and produced with money from his mother’s Liquid Paper enterprise. And if you haven’t seen it, I suggest you check it out someday.

Released in 1981, Elephant Parts rightfully owns a place in music video history for many reasons: it was visually spectacular for the time, Nesmith’s songs are fantastic, and the comedy skits are freaking hilarious. Sure, a little dated when you see them now, but still funny.

Nesmith also pokes fun of his own albums a few times in the video: his Live at the Palais album is used as a Ronco-type slicing device, and later he shows film “evidence” of his Infinite Rider on the Big Dogma being mistaken for an UFO. That skit contains one of my favorite dialogs:

Nesmith: …and there, he’s got it. (Kid holds up album) The kid’s got it. See?
Scientist: Holy smokes! What is it?
Nesmith: (Leans back, relaxing) Infinite Rider on the Big Dogma.
Scientist: What?
Nesmith leans too far and falls backwards.

I guess you have to see it to truly appreciate it…

One of the skits was called “Large Detroit Car Company.” Rather than give you a play-by-play of what it’s about, check out the clip below–and know why this was the first thing that came to mind about today’s rejected bailout.

It may have only been a comedy skit from 1981, but it really makes you think about things, doesn’t it?

To check out more Elephant Parts, YouTube is your friend. Note that it’s much better to view the skits in the order in which they originally appear as they segue perfectly into the next segment, which will make more sense than watching them out of sequence on YouTube. For that, I recommend picking up a copy on DVD. And I’m not saying 1981 was a long time ago, but I had this on Laserdisc*–really!

Speaking of cars, the L.A. Auto Show starts today and, although I’ve gone religiously in the past, I think I’m going to skip this year as I don’t believe that there’s any room for any kind of bravado or back-slapping from any automaker. The economy sucks right now, very few people are in the market for a new car, and I can put the admission cost of $10 to some better use elsewhere.

And oh…I’m not much to brag about things (uh-huh), but c’mon… 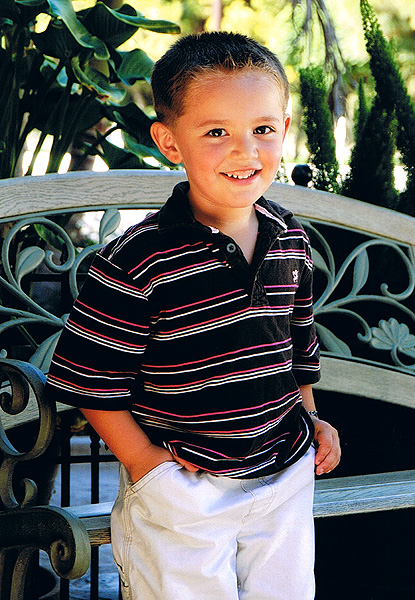 Is this a good-looking kid or what? This was one of Anthony’s poses from his school picture shoot the other day. If this kid isn’t James Cash Penney catalog material, I don’t know who is! You can see the rest here.

That’s all I got for now. Have a great weekend, all. See ya!

*Linked for you young punks who don’t know what the Hell I’m talking about.