It took a little wheeling and dealing but the nightmare involving our Ford Escape is now over.

And here is the result: 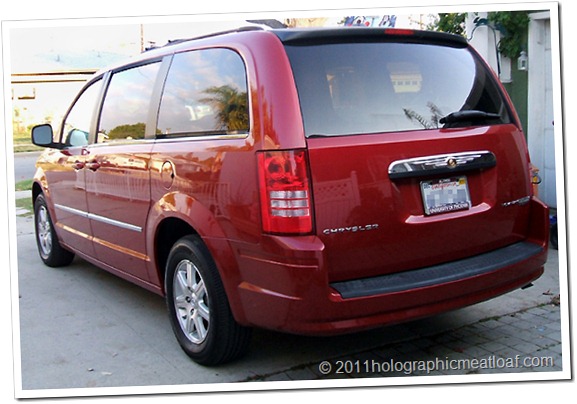 That’s right, peeps, we traded it in for a minivan. And we wouldn’t have it any other way.

It’s a 2009 Chrysler Town and Country that we purchased from Sunrise Ford which is way out in Fontana (or Fontucky as some locals refer to it) from the salesman that helped us out on several other cars. He definitely pulled through on this deal as well.

It’s also a step up from the Escape in that it is larger, seats 7, and has storage up the yin-yang. So much storage, in fact, that Anthony is now stowing away all of his toys into whatever compartments he can find which is fine with us since it won’t look so messy inside (and I have no problem with that). The Stow-N-Go seating is beyond awesome—the seats fold into the floor, leaving the van practically empty should you decide to give your 900-pound friend a ride to Wal-Mart or buy a MINI Cooper and don’t have someone to drive it home for you. It’s pretty cavernous.

When we were looking at cars years ago I had hinted to Ann that minivans are incredibly useful, even more so than SUVs in some respects. And given the fact that most SUVs will never be driven off-road, a minivan makes sense since it will carry the family, all the cargo you need, and is extremely comfortable on long trips.

We’ve only had it a few days and can’t be happier with it. It’s just the start of the good things that will happen this year. Now all we have to do is begin working on everything else that needs attention but look at it all in a positive light.

I’m still convinced it’s going to be a good year. It couldn’t be worse than the last

#SeenOnMyWalk: #RKelly in the #gutter instead of being trapped in the closet. (Does anyone remember that? No? Didn’t think so.)
I haven’t seen anything worth posting lately so here’s my latest drawing and its accompanying #sticker done in @procreate and printed by @stickermule. #JungleAirlines is the airline that was shown a few times in the show #AppleAndOnion but more prominently in the episode “Sneakerheads,” where the duo takes the airline to the jungle to retrieve their passports in order to make their last will and testament so that Mayor Naise can’t inherit them when they die. If none of this makes any sense, then you should probably be watching this show 😁
6:18 am: File under hashtag #seenonmywalk. Imagine explaining to someone much younger than you that at one point in time, a newspaper comic strip character (“A WHAT character from a WHAT paper?”) was so popular that people were sticking stuffed versions of him to the insides of their cars — and having them stolen. (Article: https://www.mentalfloss.com/article/87936/great-garfield-car-window-toy-craze)
Here’s something a bit different, something I saw while on my walk last week but forgot to post. The first shot was what I ended up taking away from this object; the second one shows the whole thing in its unedited glory. It goes to show you that with the right vision and a little creativity, even the most mundane, ordinary things can be transformed into something entirely different.
Back to more recent shots: saw this while stopped at a red light today. Pretty sure Fred’s violating some kind of OSHA rule by not wearing proper footwear, but at least he has a hard hat.
Forgotten shot from a few weeks ago. It’s an old dresser drawer that became part of a #BMX track along the side of the #SanGabrielRiver trail.