Just I had reported way back in February and as was obvious by the survey I had taken, Virgin Mobile definitely had a new smartphone in the works.

And as Engadget had reported on June 9, 2011, it will be the Motorola TRIUMPH, which was one of the names I had to choose from the list Virgin Mobile was considering:

Personally, I chose Theory because it sounded much cooler – at least I thought so.

Here’s the list of purported specs from the survey:

All of those specs match up to what is posted on the Motorola Theory’s…I mean, Motorola TRIUMPH’s Fact Sheet. And now comes word from my friend CHESSNOID – I get to call him by his real name since I’ve known him for years – that this new Android phone will be making its debut in less than a month on July 19, 2011.

This will be Virgin Mobile’s third entry into their line of Android phones which I can practically guarantee will make people wish they hadn’t signed a two-year contract with their current carrier for a phone that can do pretty much the same stuff this one can – at a fraction of the cost in terms of phone price and monthly service. In addition to all of that, the phone is a beauty: 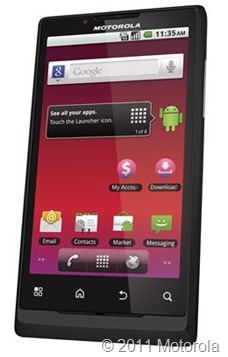 As for me, well, while the phone definitely a looker and something new to behold, I am still enjoying my LG Optimus V and have no regrets about buying it. I only wish it had more internal memory to do the things I’d like it to do.

The TRIUMPH will be a perfect phone for those wanting to jump ship from their current contracted carrier but honestly, it offers only a few more upgrades over the Optimus that I can’t justify spending the money on it no matter how pretty and shiny it may be. The most obvious upgrades – HDMI output, larger screen, faster processor (1GHz vs. 600 MHz), and the front-facing camera – might be enough of an incentive for some current Virgin Mobile customers to upgrade but not quite enough for me, at least not at this point. About the only thing I could use from that list is the faster processor; the rest are just nifty but not entirely useful to me (although a larger screen would be nice but not essential). The only way I’d consider it at this point is if Virgin Mobile went ahead with their Free Phones for Life or the Virgin Mobile Phone Fund programs, which I wrote about here.

Speaking of price, no word of the phone’s MSRP has been mentioned but I’d wager that this one could be somewhere in the high- to mid-$300 range. My guess would be $349 but don’t quote me on that.

UPDATE: My buddy CHESSNOID now reports that the phone will have an MSRP of $299.

But hey, all of this is just me talking. Have anything to say about it? Go ahead and say it below and as I had mentioned before, you can now sign in with your Twitter or Facebook accounts to comment.

By the way, if my stats are any indication, the interest in Virgin Mobile continues rise as my traffic has been more steady and heavier than usual with all of my Virgin Mobile posts being the most popular. Maybe people are now starting to realize what an incredible value this prepaid service really is, without the “shame” of admitting that they are on a prepaid plan.

After all, with phones like these, there’s not a lot to be ashamed of.