We love thrift shopping. There’s no question about it.

Sometimes you find some really cool stuff and other times you wander around aimlessly and just enjoy the selection of garbage on display, garbage that was once brand-spanking-new and hanging on a shelf of an amusement park or carefully selected by a gift-giver for their beloved Aunt Bessie. In some cases it’s just something that someone outgrew or just doesn’t need anymore.

Now it’s all carelessly just sitting amongst the rest of the used items with prices dispensed by a price sticker gun and applied by a person making minimum wage.

Granted, I prefer shopping at a place called Savers but they are not too close to us. The trade-off, however, is higher quality merchandise than most other thrift shops.

But today we went to Goodwill as we waited for the TJ Maxx next door to open – and that’s when the fun began.

This was one of the first items I saw when I walked in the store:

Um…Jewish maracas? Isn’t that like saying “Mexican gefilte fish”? And isn’t that price a little steep for being a thrift shop item? Look, I’m not perpetrating a negative stereotype here but that price is absolutely INSANE! Maybe, just maybe, they meant to label it $2.99 because after some Googling, I found said maracas (referred to as “Mazel Tov Maracas” for Bar and Bat Mitzvahs or other events) for as little as $9.99. Heck, one place was selling a dozen for $27.99.

Still, it’s not something you see every day – at least not this goy.

I did manage to find a few never-worn t-shirts from local 5ks from a few years ago that I ended up buying. It’s not like I like to pretend I run; I actually do as was evident in a post not so far back.

After finding my shirts, I decided to look through the collection of hats/caps which for some reason I try not to buy from places like this. While rummaging, I found this splendiferous pirate hat from Disneyland which Anthony was all-too-eager to model for me: 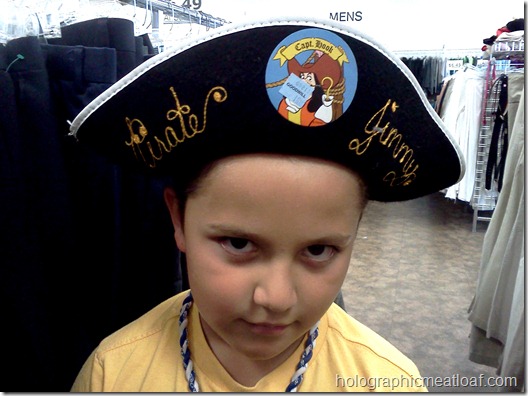 This would have been a great find if Anthony’s name was Jimmy.

See, and this is what I don’t get: stuff from Disneyland is not cheap and generally kept forever as a memoir from a vacation or a day with the family. Why did Pirate Jimmy end up not wanting this anymore? Did something happen to him? Kind of sad but interesting to think about.

Finally, after coming across a baby blue trucker’s hat from Kennedy Space Center emblazoned with a silk-screened image of the Space Shuttle on the front panels, I saw this hat and literally was laughing to the point of slouching over and having aching sides: 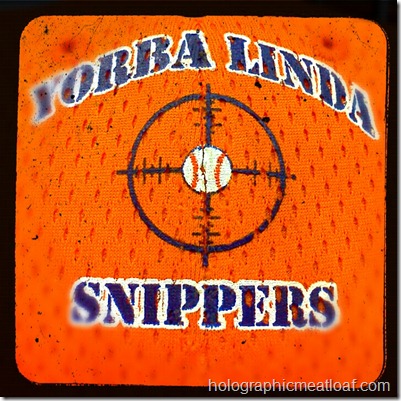 Can you imagine trying to be on the field while wearing this hat and having your opponents constantly laughing at you? But maybe this was the [sic] Snippers’ strategy: to confuse the enemy with such a painful misspelling that the other team wouldn’t be able to concentrate on the game at hand and drive them into hysterics.

Hey, it worked on me.

Can’t wait for what I’ll see during our next visit.

Until then, I’ll have to live with the regret of not picking up this nifty jacket from Savers about a month ago: 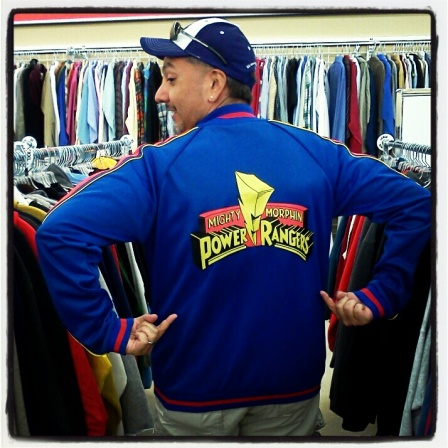