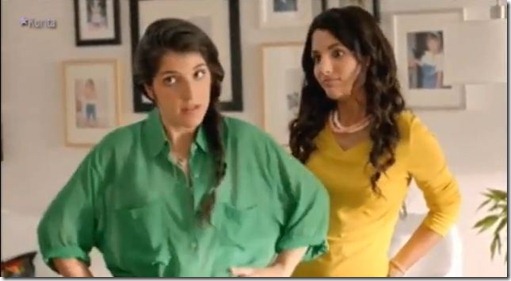 What you are looking at is a screengrab from what could quite possibly be the most poorly written and acted commercial in the history of mankind.

The commercial is for AT&T’s U-Verse TV service which offers the unique feature of being portable through the incorporation of a wireless receiver. In this commercial, a group of Hispanic girls are obviously smitten with the star of their favorite (fictional) novela, Viva el Amor, but are unable to watch the show because of one problem: the father of the girl in green is not only asleep but he’s sawing some serious logs as well.

So, in an attempt to make things better, the only other girl who has a line in the commercials says, “Let’s move him” which I take to mean the star of the novela. Green Girl then goes over to Papa’s Barcalounger to try to move him instead of the TV.

“What are you doing?” asks the other girl.

That’s when the drama unfolds and Green Girl delivers the over-acted line of, “Well…back in my day, this was the only way we could hear the novelas over Papa’s snoring.” This means that as a little girl she had to roll Papa’s ass out of the room so she could watch her novelas in peace since apparently he has a really bad case of narcolepsy.

That’s when Mom behind her nods approvingly with one hell of a goofy smile on her face. Note her crazy eyes, too. We also here some other smartass say “Whatever” off-screen.

The other girl then tells Green Girl they’ll be in the patio and demands she bring the popcorn. Then they wheel the TV and wireless receiver — still plugged in, by the way — into the patio to enjoy the show while Papa snores his ass off.

This commercial irks me to no end and I want to throw a brick at my TV each time I see it. As I said, it’s so poorly written and acted that the mere 30 seconds it’s on seems like an eternity. It’s stupid, stereotypical, and downright annoying with as many times as they show it.

It just makes me that much happier to be a Verizon FiOS customer.

This is a car. Not just any car, but the car that was used for @thrashermag 2019 Halloween Hellbomb. This 1990s Toyota Camry was basically turned into a skateboard ramp on wheels then later destroyed by those in attendance. It has been sitting in a parking lot since then and one day just for fun, we took my son’s 1991 Camry and parked next to it for some pictures. His is in much better shape but could probably use some parts from this one 😁
I never had the opportunity to ride @bigredbuslb but that changed on Saturday when it took us from CSULB to @rancholoscerritos for the start of #RanchosWalk2021. It definitely gets attention — just about everyone who was out stopped to wave at us 👋🏼
This week: shots from things I saw during #RanchosWalk2021. I passed a #crosswalk at @csulongbeach that was getting repainted and the workers tossed this to the side, so I thought it would make an interesting #abstract shot.
#RanchosWalk2021 is in the books. I didn’t take too many pics with my phone this time because I was using film so those will be posted later. The walk went through Municipal Cemetery where I saw this busted #headstone leaning against a tree. Such an unfortunate thing to witness but fascinating at the same time. How did it break? Who moved it? How many different fonts can be used on a headstone, especially with the emphasis on “DIED” in italics and a drop shadow? So many questions and those don’t include who Charles was and why he passed at 18 and 5 days. I could spend a day at these cemeteries shooting pics and asking these things.
Working literally across the street from the @formulad @gplongbeach venue meant walking down during lunch and shooting Formula Drift cars as they warmed up. With last year’s events canceled and all of us still working from home, I’m going to unfortunately miss this year’s festivities. That said, here are some shots from 2019. I typically take close to 200 shots from this vantage point and end up with just a few good ones.
Random toy seen on my walk yesterday.