On June 18, 1998, I was just another punk kid a year out of high school. I had a really bitchin’ Chevrolet Chevette which I aptly named The Silverfish because of its paint job.

That day was also the day (or night) of Depeche Mode’s infamous Concert For The Masses at the Rose Bowl in Pasadena, CA. The bill also included Wire, Thomas Dolby and OMD.

Was it an amazing show? You bet your sweet ass it was. And in case you want to know the prices of the event, let me consult my ticket stub which is in a frame with my autographed “Music for the Masses” LP.

Wow! That’s, like, almost $30! I could have filled up my Chevette for the month with that money! Yeesh! But remember, $22.50 was a lot of freaking money for a 18-year-old back then (especially one working at a photo lab making $4.25 an hour). And what was great about the parking was that I parked on a golf course and made some serious donuts on it after the show. I bet some golfers were seriously pissed off the next morning.

But I digress. The 101 show was about as memorable as any I’ve ever been to: 80,000 fans, the food fight, the thunderstorm during “Something To Do” and “Blasphemous Rumours,” visiting all the local record stores in Pasadena before the show began. And did I mention 80,000 screaming fans? It was truly a day to remember.

I bought a couple of t-shirts at the show–$20 each–and still have them today. In fact, I tried one on tonight and guess what? 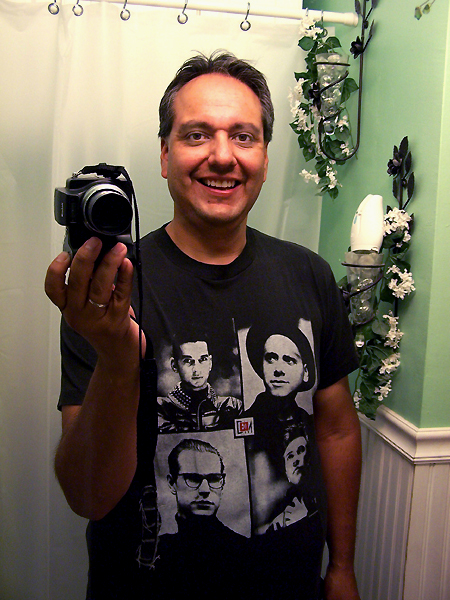 The fruits of my weight loss labor have paid off–the shirt effing fits 20 years later! And that’s an XL, not XXL. Me so happy. But I wish I had my 1988 hair back. Damn you, receding hairline!

(Note to self: get somebody to start taking your picture.)

Take a trip down Memory Lane. Check out some most outstanding 101 audio and video clips on Depeche Mode’s main page.