Kim (aka LadyGypsy) was kind of enough to tag me for this little meme, so here I go and here are da rulez:

Here’s what I ended up with (and click it to embiggen): 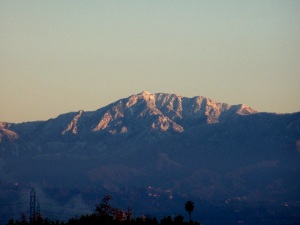 Not so long ago, we here in southern California were in the middle of a cold snap (for us, at least). The temperatures were in the 30s in the morning and with the rain we had, it produced plenty of snow in the local mountains.

Here you see proof that we do indeed have weather out here. This was actually one of many shots I took the day I posted this image; this one not being the best 😛 We eventually drove up into those mountains to see the snow up close and man, was it a lot of fun.

So here’s who gets tagged: whatigotsofar, Preston, and Fitness Surfer (a regular reader of my weight loss blog). I know that’s only 3 blogs but honestly, those are the only ones I follow regularly. All others are tech blogs and stuff along those lines. Now go to it!

This meme comes at a good time because, as is obvious, I haven’t had much time to post lately. Since buying my treadmill, I’ve been using it regularly and when I’m done, I pretty much collapse on the couch and rehydrate myself. I’ve been jogging about 2 miles a night and feeling pretty good about it. I get the feeling the 5k won’t be as tough as I thought it would be but hey, who knows?

I have also been fighting off a cold or something these last few days but I haven’t let it take me down. If anything, it seems that getting the heart pumping by running on the treadmill may be working better that sitting around sulking about being sick. I’m almost over it and not coughing as much but I’m still taking my multiviamins and drinking plenty of fluids. My runny nose is pretty much gone, too.

Anyway, it’s almost The Kid’s bedtime and my time to drag out the treadmill and get running. I’m looking forward to seeing what pictures you all end up posting!