Okay guys, Dave’s got a few more nifty photographic tips for you after attending a birthday party for one of The Kid’s friends and seeing some really poor actions by parents.

I really wouldn’t consider this a follow-up to my post entitled “How to Hold a Camera” since this one is aimed more at the aim-and-shoot, fixed-focus camera crowd that doesn’t know any better. Not that owning a new DSLR makes you a pro, but…

And keep in mind that I went out and shot all these just for this post, so be thankful I care so much about your photographic ventures.

Shooting Through A Screen: This was the one violation I witnessed yesterday that drove me nuts. A parent was holding their aim-and-shoot camera up to the screen of a bouncy castle, trying to catch a shot of their kid at play. With the flash firing, the result probably looked something like this (minus the glowing eyes and the fur, unless their kid is a Chupacabra): 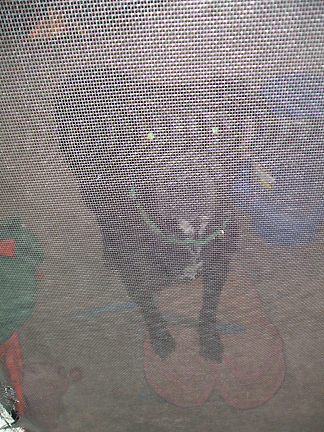 See…no, people. Don’t do that. This will be all you get, and there’s no amount of Photoshopping that will solve it (that I know of) and chances are an aim-and-shooter isn’t using PS anyhow. I do realize that this isn’t exactly the same kind of screen but nevertheless, if you are using a flash for the shot, the screen will probably show up.

Possible Solutions: Move closer to the net and stick the plastic fixed-focus lens through a hole, but then you take a risk having the flash obscured by the net or a knot holding it together, resulting in poor lighting again. The other solution is to wait for your kid to stop monkeying around inside since you own an aim-and-shoot and will probably only get a blur anyhow.

Shooting Through A Window: Here’s an epiphany for you guys: windows reflect light. No, they really do. Wanna see?

This was the one thing that drove me nuts while working at photo labs because people would shoot pictures of the Las Vegas Strip through their car’s windshield or side window and end up with a few lights and one big blob. And then they’d complain to me about it.

Possible Solutions: Turn your flash off–duh! While using a flash through a window may get a majority of your shot, you’ll still end up with the flash’s hotspot somewhere on the shot or if you shot it close to the window, a lot less contrast. And whatever you do, don’t be a moron and try to double-up your stupidity by shooting through a window and a screen:

Shooting Into A Mirror: This one’s for the MySpace crowd. Here’s an example: 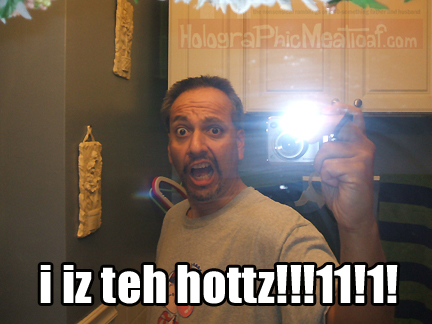 Possible Solutions: Turn the flash off–or get someone to take your shot, you lazy bastard. And you’re not that hot, either.

Daytime Flash: As you can tell, the previous situations called for turning your flash off while taking the shot. But this is one case in which I’m begging you to make sure that the flash is on, and it doesn’t matter if you have an aim-and-shoot or DSLR. Take a gander:

My lovely wife Ann is seen here getting showered with fake snow, or bubbled-up soap in this case. With strong natural backlighting and no flash, her face would have been mostly dark while the background would have been rather bright. Not an ideal way to shoot.

Possible Solutions: Always shoot people with a flash during the daytime, even outside and in sunlight. This is a case where my habit of shooting in daytime with a flash paid off, but I’ve seen shots of people standing/sitting in the shade of a tree with no flash and you can’t even make them out. In that case, it’s one great, big DUH–use your freaking flash!

That’s all I got for today. I’m heading off to the Angels game with a buddy later today while Ann and The Kid will be few miles from the stadium at Disneyland. She was originally supposed to meet an old high school friend there but for the umpteenth time, she stood Ann up as I told her she would. I honestly don’t know why Ann gave her anything beyond a second chance; I would have written her off a loooooong time ago.

See ya, and happy shooting.