If you live anywhere in the Los Angeles area, those three names instantly ring a bell. You’ve heard them all before, and in that exact sequence, but you can’t remember where.

They are almost like an L.A. version of Mount Rushmore, localized to the mudflaps (see left) of trucks sold at Western Truck Exchange (WTE), a business specializing in the sales and service of, well, commercial trucks.

And all my life those three heads have haunted and taunted me, leaving me wondering just who these three guys really are and, most importantly, how I could get that logo on a shirt for all the world to see.

And today, after years of wondering, I got to meet one of the Floating Heads Three. But let’s go back a bit.

Last week I sent an e-mail to WTE explaining myself: seen the logo all my life, cool to have on a shirt, blah blah blah. I enquired about merchandise they might have for sale such as shirts or hats.

I got my reply yesterday from Dan Holtzman, or as the rest of L.A. knows him, The Dude in the Middle of the Mudflap. In the e-mail, he explained that they didn’t have t-shirts but…

We do have some hats left though.  If you would like one just come on down and ask for me and I will make sure you get one.

I just about shit my pants. Not only do WTE articles of clothing exist, the missive came from Dan himself. My life was just about complete at this point.

I replied to Dan’s e-mail, telling him that I would be by sometime this week to pick up my hat(s). Turns out I couldn’t wait—I made the trek down there today right after I dropped Anthony off at school.

So I get on the 405, sit in traffic for a while, get on the 110, sit in more traffic, then finally get to the Manchester Avenue exit. This was so going to be worth the trip.

Western Truck Exchange—along with the Floating Heads Three—can be clearly seen off the west side of the 110 freeway. But upon further review, it seemed that this building was the parts and service department and I wasn’t sure if this is where I would finally receive my Los Angeles cultural equivalent of frankincense and myrrh.

So instead of stopping there, I went east on Manchester to their sales lot. I parked the truck, entered the building and BAM! see that the logo is emblazoned on the wall behind the reception desk—and the logo is gigantic, probably larger than their actual heads. I should have taken a picture.

I was met by a kind gentleman at the door and told him I was there to see Dan. He then said that Dan spends his day between both buildings, the mornings at the parts and service building. Not an issue.

So I head back to the truck where I’m almost certain a drug  and/or prostitution deal was going down right on front of where I was parked. (This is L.A., people.) I get in, get the hell out of that area, and mosey on down to the parts department.

I walk up to the counter and ask for Dan. He’s busy but tells me to hang on and finally, after years of wondering, he greets me. I tell him who I am and we then shake hands.

Dan runs off to the storage area and promptly comes back with two hats, which I am all too happy to pay for. As he was ringing me out, we began to talk about the popularity of the company’s logo on t-shirts.

You see, I’m not the only one obsessed with this logo. Check out this LosAngelous article and interview with Wayne in which they discuss this very topic. And if you Google “western truck exchange shirt” you get tons of results and as matter of fact, Dan pointed out that one of the first times he saw his face on a shirt was when his daughter saw a store on Melrose Avenue selling WTE shirts. He also stated that he saw a character wearing one in a movie (which one, I don’t know).

All of this from just having your head on a mudflap. Amazing when you consider they’ve been in business since 1922 and that the phenomenon gained momentum before this Intarweb thing even existed. Viral marketing be damned.

Just as I was ready to leave, I mentioned that Anthony is a truck freak: fire trucks, UPS trucks, etc. Dan then told me that I could bring him down one day and he’d be glad to show him around the insides of some of the trucks on the lot. Now how fucking cool would that be to a 6-year-old boy?

So there you have it; one of my childhood goals has been fulfilled. And oh, my hat? I’m wearing it as I type (and yes, it is a trucker’s hat): 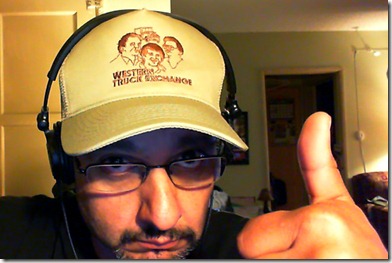 Thanks to Dan (and Mark and Wayne) and all at Western Truck Exchange for being so cool. If you need a truck or parts or service, you should definitely hit them up. If they treated me—some dumbshit, idiot blogger who just wanted a fucking hat—with this kind of respect, you’re pretty much assured to get the same treatment if you’re looking to buy a truck.