I bought this book at the thrift store last March only because I thought it would be an interesting read. And it really was.

But given yesterday’s announcement by Pope Benedict XVI, who knew this would come in handy in my quest to become the next pontiff?

No. There’s no way I’d want that job considering all that’s been going on within the church. Not only that, I’m pretty much disqualified: married (outside the church), not Catholic, has a child. But hey, wouldn’t it be cool to be a pretend wizard for a day, wearing a funny hat, cape, and walking with a really bitchin’ staff? Not to mention those snazzy red slippers and other fashion-backward vestments.

Granted you wouldn’t have any wizardly powers but you would get driven around everywhere in a bulletproof Mercedes-Benz, live in a city with its own currency, and have several staffers at your beck and call. 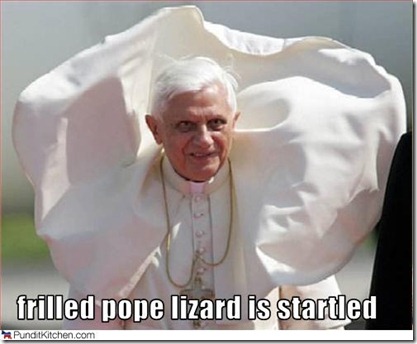