From initial thought to final product, a lot of work goes into the creation of an item whether it’s a car or a product in the frozen food section at your local Walmart.

And that’s where I saw this…lovely item. 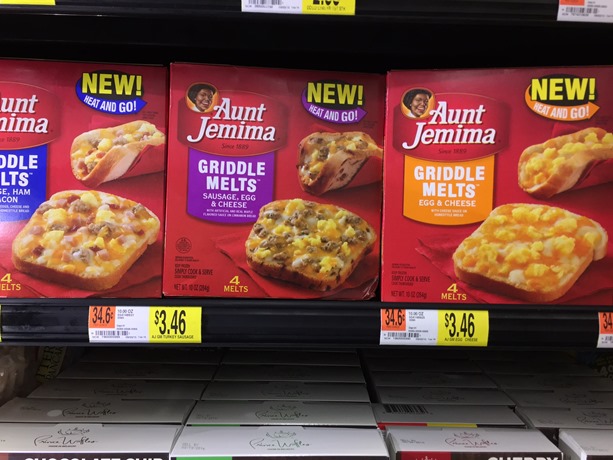 These are Aunt Jemima Griddle Melts and as is obvious by the gigantic burst at the top-right of the packaging, they are a new item.

Now let’s go back the first sentence of this post: the work involved when creating a product. Crammed somewhere in the middle of all that is taste-testing and even aesthetics. It takes a ton of people, internal and external, to finally get an item to market.

All of that said, you mean to tell me that not ONE person involved in the process of the creation of Aunt Jemima’s Griddle Melts even stepped back to look at these things and say, “Hey, don’t you think these look a little like vomit on a slice of toast?”

With that thought in mind, there’s no way I’d buy these things. Besides, a bowl of cereal is enough to get my day going. I’m just not into greasy, heavy food for breakfast anymore and that’s exactly what these things look like they are.

Well, that and vomit toast.

Anthony mentioned this video to me today because he likes to mess with it and when you see it, you’ll know why.

Here’s the setup. This was shot back in 2009 after we finished eating dinner on the patio, a dinner consisting of enchiladas and a few side dishes. We had one enchilada left so I decided to have a little fun with it by setting up my camera and letting Arliss do his thing. He was begging the whole time during dinner so I figured I might as well let him have it.

I set the camera on the table, started the video, and left the enchilada on the table so that he knew it was there. I then went into the house and kept an eye on things from inside.

The result: Arliss having a nice dinner. Note that it’s quite for the first 50 seconds or so; the action takes place after that. I like how at 1:02 he looks into the house to see if I’m coming then at 1:09, he knows he busted.

He wasn’t really but it’s funny to see.

And why does Anthony like this so much? He enjoys making Arliss “barf up” the enchilada by dragging the marker backwards when he watches the video on Quicktime.

Yesterday for lunch, Anthony — not yet 9 and still very much a kid — got a Kids Meal from Rubio’s Fish Tacos. While they serve food other than the kind that swims, their emphasis is on seafood. (He opted for the chicken taquitos and I don’t blame him. Seafood…blecch.)

As we were eating, Ann was reading the jokes printed in the sides of the Kids Meal bag. I don’t recall the first one but the second made me laugh for sure but not because it was funny.

Ann: What is the saddest fish in the sea?

Anthony (seriously): Mom, a whale is not a fish; it’s a mammal.

He continued eating, grunting and rolling his eyes in the process. 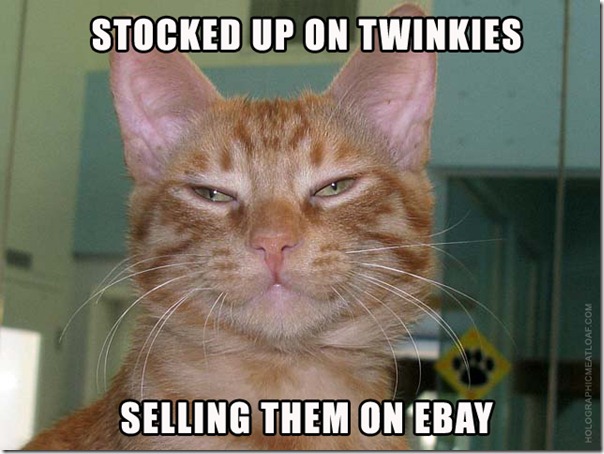 A fellow blogger brought this to light on her post today and although I’ve said it in another post I’ll go ahead and say it again.

Me and Facebook need to be further apart. I am posting way too much over there and not enough here, something I’ve toiled over since 2004. Just look at the number of posts I’ve written in the last few months. It’s pretty pathetic and it needs to stop and therefore, I’m getting back into the blog with this post.

I’d rather be sitting here writing about something than F5ing Facebook all night in the hopes of seeing what one of my friends ate for dinner – or a new cat picture. In the grand scheme of things, this needs my attention.

That’s one change. As for the other change, it has nothing to do with Facebook or social networking for that matter. It’s a personal health/lifestyle change that was discovered the other day while I was perusing a nifty app called Fooducate.

Without getting into too much detail about Fooducate, what it basically does is give you ratings of A through D on foods in its database. Curiously, I entered “diet pepsi” – my one vice – and read the results and score.

It came back with a score of C- and the reasons why it was given such a grade. What it basically came down to was that it, along with just about all other sodas, are packed with chemicals that have been known to cause cancer and that, along with reading a few articles on Active about sodas, was enough for me to decide that our next trip to the grocery store would not include any sodas. As of this post, I’ve been soda-free for nearly two weeks and have had absolutely no craving to drink one. On the one occasion when I did have a small sip of regular Coke (to prevent Ann’s cup from overflowing with bubbles at a restaurant), not only was I underwhelmed but also disgusted. It was in no way pleasing to me anymore and I was happy to have made the decision to quit.

In fact, Fooducate sort of opened my eyes to how badly processed a lot of foods are and why it’s important to know about what you’re putting into your body. Since I no longer drink sodas, I’ve switched to filtered water and while at work, green tea. The difference is that now I add only honey to my green tea and to be on the safe side, no longer throw in a packet of artificial sweetener which contains saccharin.

Sadly, Fooducate also gave my beloved Sun Dried Tomato & Basil Wheat Thins the not-too-impressive score of B- citing that it contains BHT, a chemical that is considered a carcinogen. That was enough for me. On the other hand, my Silk Soymilk Light was rated at A- so that’s definitely still worth buying.

Will the next step be vegetarianism? Veganism? I can guarantee you that it won’t but in giving up sodas and continuing to read up and study some of my favorite foods, I know for sure that plenty more changes are on the way.

And that’s a good thing in my book.