As you might recall, I had an idea not so long ago on how to spend my birthday money/Best Buy gift card. After much consideration I decided against the iPod Touch and took the family to the store to see what we can buy. Here’s the breakdown:

Total cost: Just over $150. Hey, at least we all got something and (after using my $20 Rewards certificate) we still had $37 left on the card. And what a surprise, the kid walked away with the most booty.

It then occurred to me that I still had $87 left on my Toys R Us gift card from Christmas. I had already spent $12 on some stuffed animal thing for Anthony; the rest was mine I tells ya. So what did I get? 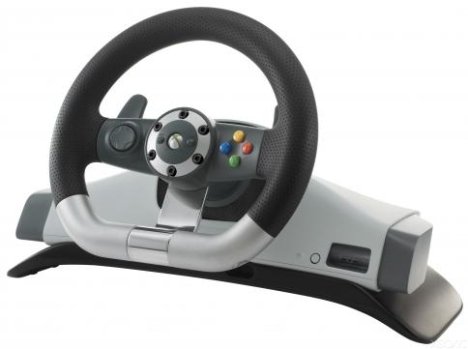 An XBOX 360 Racing Wheel. And let me tell you, it’s worth it. So far I’ve snagged a few Achievements in Forza 2 that I would have never otherwise gotten with the standard controller. I attribute that to its paddle shifters which give you more control over the car (and the fact that shifting s-u-c-k-s with the standard XBOX controller). Not bad for only using $20 of my own money.

With this purchase, Ann has officially labeled me a game dork. Oh well.

But the spending wasn’t over! I still had the birthday money to burn. Rightfully so, I bought Burnout Paradise to go along with the racing wheel. Fun game.

And finally, with that money I had left on the Best Buy gift card, I went back yesterday and took advantage of the price drop on the XBOX 360 HD DVD add-on. Foolish? Perhaps, but for $50 I got an external PC drive, King Kong HD DVD, 5 free HD DVD movies by mail, and an XBOX remote to control Windows Media Center. And once those HD DVDs hit the bargain bin, I’ll be set!

I know I said in a previous post that I wasn’t going to enter the format war but hey, I still think that at its current price point for players and movies, the Blu-ray format will suffer the same fate as HD DVD. But I do have to admit: the clarity of King Kong on HD DVD blew me away, and that was with a component connection not HDMI.

And after all this spending, I still have $70 of my birthday money left. I think I use it on Moon Pies and penny whistles.

3 thoughts on “Finding My Inner Dork”