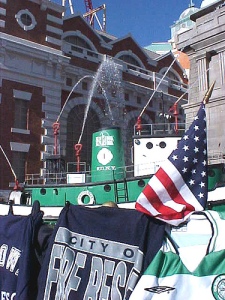 Anthony is the only four-year-old fireman I know of. He calls himself “Fireman Anthony” and me “Fireman Daddy” and has a collection of toy firetrucks next to his bed, along with a real LAFD helmet his uncle got him. He keeps his fireman boots by the side of his bed like a real fireman because, as I tell him, firemen always need to be ready at a moment’s notice and they never know what they’ll be facing.

And tonight I will have to explain to a curious little four-year-old that on this day seven years ago, thousands of innocent people–including some of his heroes in the fire and police department–died.

After all that, I will pick up my little fireman, carry him to his bed, kiss him on the cheek and salute him like I always do. As his fragile mind shifts to fighting imaginary fires in Dreamworld, mine will still see the very real and horrific explosions coming from the World Trade Center towers.