You know, I don’t watch much TV. I have no real desire to because nothing really interests me these days. Hell, I can’t recall watching a new episode of anything from the last few years.

I’m so far out of—and I use that term very loosely—the “entertainment” loop that I clicked a link to the MTV Movie Awards just to see what’s passing for…entertainment these days.

And that’s when I saw these dickbags staring back at me. These fellows, who look like metrosexual rejects from Making the Band, are apparently in yet another one of those ever-so-popular “reality shows” called Jersey Shore. So essentially, they’re famous for nothing other than looking and acting like douchebags. 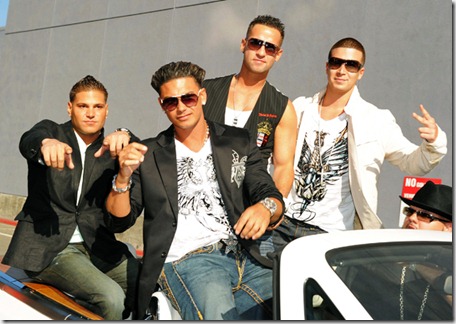 I know, I know, I shouldn’t be so judgmental and base those statements just on their personal appearance which, as is obvious in the photo above, they have fucking perfected.

Ah, but I digress—I’m sure that they are perfect gentlemen and will gladly hold doors open for women and treat them with the utmost respect.

Wow, I’m all over the place, aren’t I? So what’s the point of this post? I dunno. Maybe I just wanted to call these guys a bunch of douchebags.