Well, has it been an eventful week or what?

In addition to being a Virgin Mobile customer and getting the news of an eventual price increase on monthly Beyond Talk plans, I’m also a Netflix customer and wasn’t all that happy to see this nifty e-mail in my wife’s inbox: 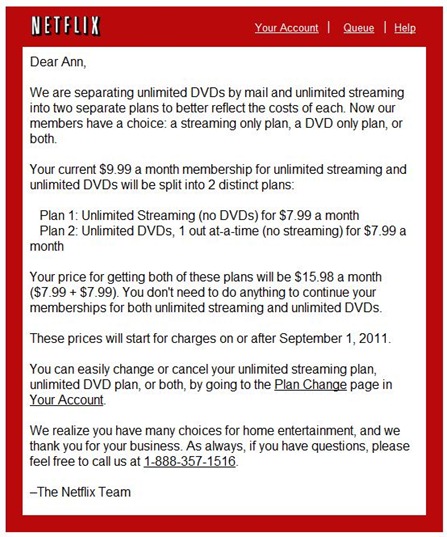 In all honesty, I’m not a really big movie watcher and rarely (if ever) see first-run movies. The wife and kid are bigger moviegoers than I since I’m working most of the time and it gives them something to do, especially during the summer. So by the time a movie gets to Netflix on disc, chances are I won’t even bother to go through the hassle of putting it in my queue and turning on the Wii to watch it. We do, however, use Netflix for their streaming content which includes the entire The Twilight Zone series. Yeah, I stayed up late one night and watched them until I puked. Oh, and every James Bond movie is there, too. Not too shabby.

All in all, this change won’t affect us too much since, well, 90% of the time when we get a disc, it sits around – usually MIA on the kitchen table – until we decide to watch it which in some cases is never. As such, chances are we will stick to streaming-only should we decide to stay customers.

But besides the shows and movies I’ve mentioned, there’s only so many times you can watch lame ‘80s movies or foreign artsy-fartsy flicks, which makes me wonder if it will be something worth keeping.

If you’re looking for alternatives to Netflix, check out this post by Russ of Fat 2 Fit podcast fame. He’s compiled a pretty good list of ideas for consumers wanting to tell Netflix to get lost.

Yeesh, what else will go up in price this week?

Forgotten shots from last Sunday along the #SanGabrielRiver. I began walking by the river when social distancing became the norm and ended up really liking it because the views are so different and yes, it helped me avoid people — a bonus for me regardless of the times we live in. From where I start to the end (second picture) and back is over 7 miles, definitely a good way to get those steps in. It had been a while since I had done this and may do it again on Sunday.
When I drew this original, I was having a bad day and it was a form of therapy. I can’t recall what had transpired but I needed an outlet to vent my frustrations and this worked out well — and could be used for any situation. But in light of today’s #SupremeCourt ruling to overturn #RoeVsWade, I decided to scrawl my feelings over it. The way I see it, guns have and always will have more rights than women in America. A rifle that nobody should own and is capable of wiping out people — children in school — in one fell swoop is not a weapon; it’s a right that the Second Amendment “guarantees.” Having a uterus? It must be controlled because we don’t know what that thing is capable of doing nor should a woman have any say in how she wants or needs to protect it. A woman’s right to an abortion is no longer Constitutionally protected and can now be regulated on a state level and in places where it’s not allowed, fines and imprisonment for all involved. Let that sink in: we can have convoys of maskless asshat truckers driving across the country complaining about mandates and using the “My body, my choice” argument — yet a woman can’t when it comes to her own. Absolutely ridiculous and bullshit of #SCOTUS and men in general to decide this was the logical choice. America, “land of the free.” I beg to fucking differ. And if my opinion bothers you, feel free to pack it up and leave but I urge you to look at the bigger picture. Imagine having a daughter, sister, any female relative who was raped and not being able to abort the unwanted pregnancy, or a pregnancy that would harm the health of the mother or child or both, or one that was the product of incest. What would you do? In an ass-backwards state like Texas, she would literally have no option but to give birth. THIS is why Roe vs Wade is important to protect. Fuck your religion, fuck your politics. This is a health issue and a right that women deserve. #roevwade #abortionrights #fuckthisshit
Look up. Taken @morongocasinoresort.
From last week’s graduation ceremonies. I’m about to transfer all my phone pics tonight and forgot I had taken this one to post.
If I had a dollar for every high-heeled shoe I came across along the river…
Like father, like son. My kid definitely has the creative gene in his blood and I have to thank my late Uncle Ben for that. He started his own skate brand called @flipangoskate and has been printing shirts (he’s wearing one in the pic), stickers, and now making skate wax all at home. He also creates all the artwork either on his iPad or drawn by hand, and his friends/partners handle the skate portion of it by doing their thing as he takes pictures of them. What he’s doing now is much more than I did at his age, granted things were much different for me. Either way, here were are standing in the middle of Seminole Drive during the family’s trip to Cabazon on Saturday. We won a few bucks, did some shopping, had a few laughs — and posed for these pics in the desert because why not? Definitely a nice outing for all of us.