It’s been bone-chillingly cold around here lately at least by California standards. In fact, tonight is supposed to be one of the coldest nights we’ve had for some time that could break records. I’ve been using my sleeping bag – tested for up to 24 degrees – as my blanket as of late and it’s been working just fine.

Either way, the 36 degree temperatures didn’t stop me from going for a 6.2 mile run at 7 am. I just had to bundle up a bit and I was fine.

Once I got home and put back some of the 950 calories I had just burned, we decided to make a trip to good ol’ Goodwill to see what we could conjure up. We love thrift shopping because even if we go home empty-handed, we always leave the place in a better mood after seeing some of the fun and crazy stuff that once made other peoples’ lives worth living.

Let’s start off with this gem that children of the ‘80s will know and appreciate. 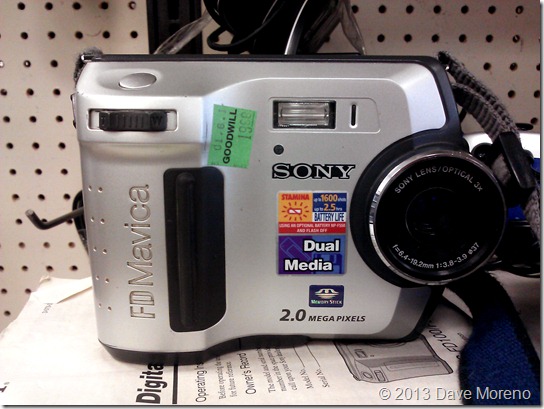 Ah, this! The Sony Mavica line of digital cameras that used floppy disks as storage media! Believe it or not, this was one of the high-end models because it was 2 megapixels and supported both floppy disks and Memory Stick media (which begs the question: Why?). I was always jealous of this one since I had the one with 640×480 resolution and having the Memory Stick option would have meant not having to carry around a box of floppies like I did one year on Las Vegas. The quality of the camera was absolutely atrocious but hey, I was cool. One disk held around 25 images if I recall. Now I carry around a phone with 5 MP and a 32GB card and it’s not enough.

*RING! RING! CLICK!* This is Jim Rockford. At the tone, leave your name and message. I’ll get back to you. *BEEEP!*

Don’t check your messages, Jim. You know it’s going to be bad news. By the way, Mike Post ruled TV themes back in the day…when shows still had theme songs…

Anthony preparing for his future.

I really should have gotten this but I don’t think my bosses would have approved. My co-workers, on the other hand, would probably fight over it or laugh at it.

Actually, some might want my job starting Monday. We’re getting swamped with projects and it’s looking like at least a week of one-hour overtime each day. This is going to come in handy and while tedious, I will gladly take it along with my raise that went into effect at the beginning of the year.

Off to bed. Or reading at least. I’m falling behind  on both…