I drove a Ford Fusion for a few years and got so used to everything in it that I’m still having difficulty adjusting to my made-in-Korea Kia Rio that I bought about a year ago.

I had to get used to manual windows, manual door locks, manual mirrors. It’s been quite a transition.

One of the things I still screw up on a regular basis is the fuel door and truck releases which are located next to each other on the floor. See, the Fusion had button for the trunk release near the fuse box and the fuel door release was the only thing on the floor. So whenever I reached down there I knew it was going to be for the fuel door.

But with the Kia it’s a different story. Both of the releases are next to each other and I always blindly reach down and pull the wrong one when I want to open the trunk. And today, for the umpteenth time, I did it again when Ann asked me to open the trunk so we could get Anthony’s golf clubs out.

“You still can’t get the right, can you?” she asked. “Aren’t there little pictures on there?”

I replied with the only thing that I felt would justify my ignorance. 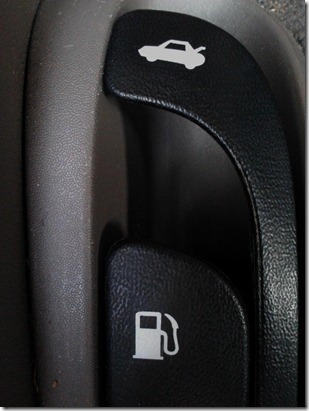 …this is what I think Korean diagrams look like.