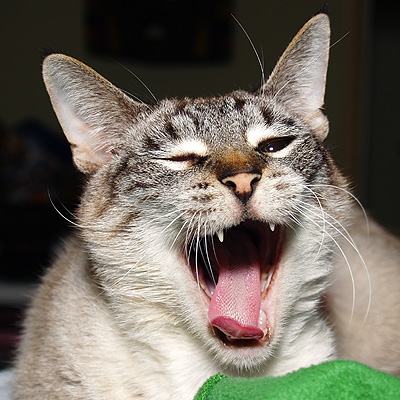 Down, kitty! That’s Ozzie, our cat who for years behaved like a dog–he played fetch, his meows sounded more like barks, and to this day he still won’t eat his food until I give him a few good pats on his backside. Now that he’s getting older (noooo!) he’s starting to be more cat-like, but that’s okay…even if I miss playing fetch with him.

The reason I shot that picture is because I was doing another external flash test as was I asked to shoot a Christmas party next Sunday. Chances are I’ll take the job since the house/venue is amazing and it’ll give me some more experience. Ann’s not a very willing subject and The Kid’s counting sheep so I decided to let Ozzie be my victim. And of course, he obliged.

Aside from gaining the experience of shooting a rather large event, I still need to replace my Xbox.

That’s it for now. I’m beat and going to lie down possibly for the night. I guess our Company Christmas Party Annual Year-End Celebration and What-Have-You really pooped me out. I can barely keep my peepers open.

Finally, thanks to Kimberly of LadyGypsy.net for following through with CookieCam 2008! I caught a few minutes of the action earlier today and it was most entertaining. I really dug the antlers!

Have a great weekend, all! Ozzie’s waiting for me to lay on the couch so I can then become his couch.